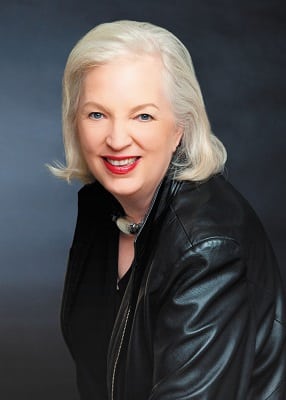 Q. Famously, you dealt with a tormented (and extraordinarily unsupportive) first husband. How do you bring characters like him into your writing?

J.A.: Spending 18 years with a man who died of chronic alcoholism certainly gave me a lifetime’s worth of experience. If you’re going to grow up to be a mystery writer, there’s nothing like hiding behind a tree next to a sidewalk after a gunfight broke out in my husband’s favorite dive bar in Gary, Indiana in 1968. All of that challenging history was there in my background, but I was beyond it, right?

When I started writing Beaumont books, I needed him to do something when he wasn’t working, so I had him do the kind of drinking I had lived with for all those years. It wasn’t until after Beaumont #4 appeared when readers started asking me if Beau had a drinking problem. My first reaction was to say, “These are books!” but when the same question kept coming over and over, I finally realized that my readers were right.

Beau really DID have a drinking problem. That’s how he ends up in treatment in book # 8 and is still sober close to twenty books later. So yes, the torment I saw and lived with all those years ago translated into that character’s background in a way that was entirely invisible to me. Incidentally, you’d be surprised by the number of people who have written to me over the years or told me at signings that seeing Beau struggle with handling his drinking problem helped them with theirs.

Q. You spent years living and teaching on an Arizona reservation. What did that experience teach you, and how did it impact your writing?

J.A.: I spent five years teaching on the reservation, and I came to love the Tohono O’odham as well as their stories and legends. When I started writing the Walker Family books, I wanted to make those people come alive for folks who would never set foot on the reservation. In 1973 my first husband and I were invited to the summer wine dance where people sit in a circle around a campfire and drink wine made from the fruit on the saguaro. (Think of a beverage with the color and consistency of tomato juice and the kick of tequila!) My husband went while I stayed home with our baby, but from then on and until the day he died, he rubbed my nose in the fact that he got to sit in the circle and I didn’t.

Fast forward several decades. After the fourth Walker Family book, Queen of the Night, came out, I was asked to come out to the reservation to do a book signing at the tribal museum in Topawa. I was very nervous about going. I had been away from the reservation for years. I felt as though I had treated the TO Nation with respect, but I had no idea how the people themselves felt. When my second husband and I arrived at the museum parking lot on a blustery Saturday morning in March, I was astonished to see more than a dozen cars with out of state license plates. It turned out, some of my snowbird fans had seen the event posted on my website and had driven 140 miles round trip to see what it was all about.

The emcee started the program by introducing the medicine man who did the invocation. It was in Tohono O’odham, but I know he was talking about me part of the time because occasionally he used the word “library.” Next the emcee announced that a group of young people would be coming out to do a circle dance. He cautioned us by saying this was a sacred dance and to please refrain from taking photos during that part of the event. However, he went on to say, once he opened it to social dancing, we were welcome to join the circle.

As I watched the circle dance, I kept thinking about my husband sitting in the circle all those years earlier. Finally, I gave myself a talking to: You’ve been griping about this for forty years, isn’t it about time you put your money where your mouth is? When the emcee announced the floor was now open for social dancing, I stood up to go down and join the circle, and that’s when the Tohono O’odham in attendance gave me a standing ovation. It was the high point of my life. As I joined hands with other people and started dancing, I thought, “My life can’t ever get any better than this!” But then it did.

Some of the Milghan (Anglo) women from those out of state cars came down and joined the circle with me! I can’t quite describe the overwhelming joy I felt. I really had made the Tohono O’odham come alive for people who would otherwise have known nothing about them.

Q. Across your series—from Joanna Brady to J.P. Beaumont to Ali Reynolds—the subject is murder but other, uplifting themes, often emerge. What do you think about the mystery genre’s ability to point out not just what’s most violently wrong with society, but also what can be great?

J.A.: With the media constantly beating the drum with nothing but bad news, it’s easy to believe that the whole world is an evil place, but that’s not true. Good people vastly outnumber bad people. And good cops vastly outnumber bad cops, too. In my various casts of characters, the same thing holds true—good outweighs the bad. And the bargain I’ve made with my mystery readers is this: One way or the other, the bad guy never gets away with it!

Q. Credible Threat (Ali Reynolds #15) came out earlier this year to strongly positive reviews. Can readers start in anywhere in the series, or should they hit book one first?

J.A.: Because people tend to buy the books that are most readily available, new readers often start with the newest book. As the author of series books, I try to include enough of each character’s back story so new readers aren’t lost, but not so much that they won’t be intrigued enough to go back and read previous stories. In that regard, writing each new book is like walking a tightrope—including enough material to bring in new readers without boring my LTRs—Long Time Readers. That being said, I know there are lots of people who are strictly IORs—In Order Readers, who want to start with book one or nothing. To help those folks out, here’s a link from my website that lists all the book in each series in chronological order.

J.A.: The next Joanna Brady book, Missing and Endangered, is written and due out in February. I’ve just finished writing Ali Reynolds #16—Unfinished Business.  The manuscript for that went to my editor in New York just this week. Because publishing schedules were readjusted due to Covid, I’m now in uncharted waters—I have two completed but unpublished books waiting in the wings. However, I’m about to start work on the next Beau book. By the way, with the cooperation of my publishers, I’m making history with Unfinished Business because Beau, normally a HarperCollins character, makes a cameo appearance in Unfinished Business with Ali who’s historically a Simon and Schuster character.

The New York Times bestselling author on THE RETREAT and more

END_OF_DOCUMENT_TOKEN_TO_BE_REPLACED

The bestselling author on NOTHING TO LOSE and more

END_OF_DOCUMENT_TOKEN_TO_BE_REPLACED

The detective novelist on LAST SEEN ALIVE and more