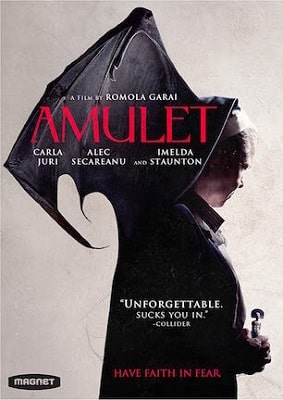 Some old war wounds never heal. In fact, they were designed to become more painful over time. Written and masterfully directed by BBC actress Romola Garai, Amulet is a slow-burn Gothic noir, about a homeless soldier trying to put the past behind him.

Tomaz (Alec Secareanu), a severely traumatized veteran of some nameless Eastern European conflict, finds himself in need of a place to crash after his London squat goes up in flames. Helpful nun Sister Claire (Imelda Staunton) offers him a peachy situation: Free room and board in a dank, shadowy old house, in exchange for handyman duties. Tomaz is initially reticent, but finds himself irresistibly drawn to Magda (Carla Juri), the sweet, nervous girl who lives in the house, caring for a surprisingly ferocious invalid mother (Anah Ruddin).

The house itself has passed the state of disrepair and is well into a spiral of decay rivaling the ancestral home of Roderick Usher. There is almost no light, and the camera lands on the abundant mold and water stains like a lazy fly on the wall. The hazy air itself has a bilious green hue, as if infected with something terminal.

When Tomaz tries to sleep, he dreams of the war, apparently stationed in a remote forest outpost. There, his lonely routine gets interrupted by the arrival of Miriam (Angeliki Papoulia), a refugee mother in search of her child.

Tomaz allows her to stay and the seeds of tragedy are sown. He only wanted to help. He tried to help.

Spoiler Alert: The waking and sleeping narratives are connected. This means bad news for the young soldier.

Our sympathy for Tomaz is never exactly on solid ground. His unspecified wartime trauma erupts in nightly terrors, and his desire to liberate the long-suffering Magda, bound to serve a dangerous and unstable mother, is evidently sincere.

Tomaz pauses in his work one day to watch Magda wrap a bandage around a fresh bite wound on her arm. As the cliché goes, no good deed goes unpunished. In this instance, his instinct to come to a woman’s aid is the worst possible course of action a man can take. There are abundant horrors to be mined in the aftermath of military service. Amulet demonstrates that the most terrible is the false hope of redemption.

Tomaz is a haunted man, brought back from the brink of despair by the vague idea that he can atone for a misdeed, through an act of sacrifice. It’s that distant, faint illusion of hope that cuts the deepest, much like the illusion of being “a good man” that’s eventually ripped from Tomaz like old skin.

The forces at work in Amulet are as old as the avenging Furies of Greek Tragedy, and they haven’t lost any power to punish transgressors with brutal clarity. Like Oedipus the doomed king of Thebes (or Mickey Rourke in Angel Heart, for that matter), Tomaz can’t identify himself as the cause of his own misery until it’s far too late to escape an awful fate, one that befits an unforgiveable crime.

Amulet is seriously grim going—though handsomely filmed—and includes interludes of body horror that would give David Cronenberg the willies. It also progresses at a snail’s pace, which works to them film’s advantage, allowing the viewer to gradually get acclimated to the accursed atmosphere. Even so, when we’re finally able to consider the grand scale of justice served at the conclusion of Romola Garai’s vivid and terrible revenge tale, the effect is breathtaking—and should not be missed.