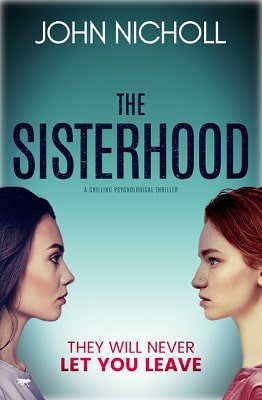 John Nicholl is back with another chilling psychological thriller. Working with some of his strongest characters, Nicholl crafts a story that shows the lengths to which ‘girl power’ can go when someone’s in trouble, even if it’s not entirely legal. Those who like quick paced thrillers will want to check out this latest by John Nicholl.

Detective Inspector Laura Kesey knows that she can only do so much when it comes to victims of domestic violence. When she goes to see Sally in the hospital, the victim is anything but convinced by the detective inspector’s prodding. However, there is a glimmer of hope, as Sally agrees to move to a domestic violence refuge, where she can be safe and live with other women who have been through some of the same experiences.

Back at the office, DI Kesey and her partner, Detective Sergeant Raymond Lewis, are handling the case of a body that was found on a rural Welsh road. It appears the man was run over multiple times, though the forensics lean towards it not being an accident. Using witness statements and some video leading up to the event, it would seem that the vehicle involved has been located, though it’s torched and left to burn.

When the owner calls in the missing vehicle the next morning, Kesey and Lewis try to piece it all together, as they learn the victim has a long history of violence and abuse. Everything traces back to the aforementioned domestic violence refuge, where the women are able to offer alibis for one another.

Within the facility, these women may have been through a great deal, but they are resilient. So much so that they have created The Sisterhood, a group determined to work to target abusers and offer them the ultimate punishment. They plot their revenge and make sure no one’s the wiser as their marks meet untimely deaths. All in the name of empowering women and keeping the scum at bay.

While Kesey and Lewis are getting nowhere fast, their competence is questioned by superiors. More victims emerge, all with ties to the refuge, but Kesey seems too quick to point fingers. With little to go on, Lewis tries his hand at extracting information his own way, which raises a red flag among members of The Sisterhood. Might his discovery of what’s going on paint a target on his own back?

As Sally’s attacker is released from prison and tries to confront her at the refuge, it’s high time she is brought into The Sisterhood, where she will be able to put this all behind her. After an initiation, Sally realises that this is not simply ‘girl power’ but a group of ruthless killers who will stop at nothing while abusive men roam the streets. Will DI Kesey arrive in time with concrete evidence to dismantle them, or will new victims fuel The Sisterhood’s continued bloodletting well into the future?

I have long enjoyed the work of John Nicholl, as he delivers some of the most chilling stories compacted into shorter novels. His pieces hit to the core and tie in some of his past work experience, leaving the reader wanting more, while also feeling the depths of despair some of the plots present.

DI Laura Kesey has been a central character in a number of Nicholl’s past novels, having risen through the ranks and honing her skills. While she tries to move from the shadows of her predecessor, Kesey has a style all her own that proves to be as gritty as any cop in such a series. Her new responsibilities have taken a toll on her family life, though Kesey attempts to juggle it as best she can. Focussed on the case at hand, Kesey proves to be a wonderful role model to her partner, even if he is not yet ready to accept her guidance.

Nicholl uses his dark plot to introduce a number of great secondary characters, all of whom enrich the story in their own way. From other coppers through to the unique group within The Sisterhood, each flavours the story and pushes the narrative in multiple directions. There’s a great sense of thrill, fuelled by strong characters in all aspects of the story.

It takes a talented writer to be able to write a dual narrative, where the reader can see the killer from the outset. Nicholl does this effectively, pushing things along and offering clues to the cops as they seek to assemble the case. The Sisterhood is a unique gang and one whose antics will continue until DI Kesey is able to cobble together enough for an arrest.

With alternating chapters that explore the story from both sides, Nicholl keeps the reader abreast of developments and yet leaves the door open as to when the final piece will fall into place. Short chapters push the story along and the writing adds momentum to an already gripping piece. Nicholl has proven he is at the top of the genre and I can only hope he has many more ideas to keep his fans coming back!

Kudos, Mr. Nicholl, for another winner. Wales has never been such a great thriller locale, though you seem able to bring it to life with ease!

Their one purpose: to bring down the ruthless and elusive serial killer

END_OF_DOCUMENT_TOKEN_TO_BE_REPLACED

“We have your son.” It’s the call that’s every parent’s nightmare.

END_OF_DOCUMENT_TOKEN_TO_BE_REPLACED

He investigates in secret to untangle the mysteries behind the killer