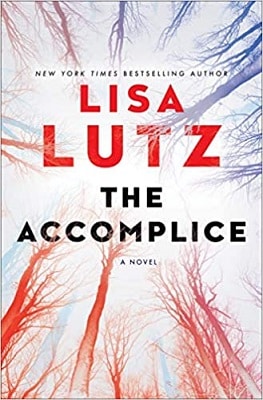 “I think we’re going to be friends,” Owen said.” “Let’s not get ahead of ourselves.” Luna replied… that was the day it all began.”  –The Accomplice, Lisa Lutz

Lisa Lutz’s The Accomplice is the story of a friendship between Luna and Owen. It is 2003 and Luna and Owen meet in the library for the first time. When Luna collapses on the floor and has a seizure, Owen calls an ambulance. We are first aware that she is hiding a big secret when she evades the ambulance and goes the opposite way. As their friendship strengthens, Owen realizes Luna has a lot of secrets and is always looking over her shoulder. When Owen’s ex-girlfriend is found dead, Luna stands by Owen, insisting he is innocent.

The Accomplice is not laid out like so many other mystery/thriller novels as there are two murders and two separate investigations. There are dual timelines; In 2003, we see Luna and Owen immediately bond with each other. In 2019, we see Luna and Owen both married to other people but living quite close to each other and still the best of friends. When another dead body surfaces, we learn it is Owen’s wife Irene who is the victim. We see both investigations unfold, as we learn what happens with Owen as the prime suspect in both deaths.

There are so many nuances to this book that it is hard to focus on one particular story line. While Owen and Luna are never drawn to each other as more than friends, they also seem to have unfulfilled relationships with others, also, such as Luna’s relationship with Griff, Owen’s brother. Once Luna’s secret reveals itself halfway through the book, we understand why she is the way she is; introverted and antisocial.  His background can also explain Owen’s lackadaisical and non-committal attitude towards his life and his parents’ odd tendencies.

Another instance where The Accomplice is unusual from other mystery novels is in the execution; with dual timelines and dual point-of-views. The book moves quickly and doesn’t lag at all. All the characters are well-developed, even the extraneous ones such as their friends from college. Owen and Luna’s perspective voices shift back and forth quickly, so that you know who is thinking what as scenes play out.

This is not a “pulse-pounding thriller” as one reviewer put it. I thought it was well-paced and kept my interest but I kept expecting a major twist at the end and it just never came. I liked the ending and found it apropos but I was not blown away as I expected to be. While I was fine with it, other readers may have to adjust expectations.

The Accomplice is available at:
Amazon