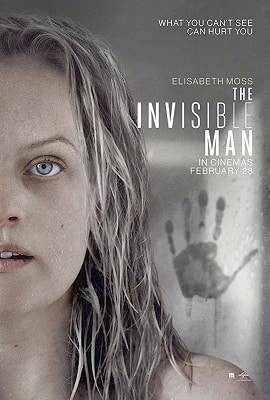 The Invisible Man was released in February of 2020, and—due to the pandemic—Universal released the film digitally after just four weeks in theatres. Originally, Universal was going to release films to create a new Monsterverse based on a catalogue of characters such as the Mummy, Dracula, and so on. However, following the critical and commercial failure of The Mummy in 2017, Universal abandoned their idea for a shared universe and instead moved to establish each film in its own right to become standalone. This led to the re-development of The Invisible Man after it had been placed on hold, with filming taking place from July to September 2019 in Sydney.

The film did exceptionally well with critics, praised for the acting from Moss and the depiction of abuse in relationships and the forms it can take. Along with being majorly successful commercially, the film had a budget of $7 million and at the box office it is estimated to have generated $143 million.

The Invisible Man had been on my list to watch when it was released but everything that happened, I had been waiting for it to appear on Sky Movies, which it finally did, giving me the chance to watch it! I have to attribute praise to the character driven story, the cinematography, and the depiction of abuse.

Cecilia is stuck in an abusive relationship with an optics engineer, Adrian. When she eventually manages to escape, he commits suicide within a couple of weeks. However, after some peculiar events start happening to her, she begins to believe the suicide was staged and he has somehow become invisible. When Cecilia begins to tell her friends about the situation, things turn nasty. With death appearing to follow her and no-one believing what she is saying, Cecilia has no choice but to take matters into her own hands and begin to fight back against the invisible force wreaking havoc on her life.

Elizabeth Moss plays the main character Cecilia and initially when I put the film on, I thought I had accidentally skipped forward 10 / 15 minutes, as it takes no time in entering into the action. From how the story is written, the acting from Moss and what we are shown in the opening five minutes, we know straight away that we are dealing with an abused woman who is trying to run from her partner. That was by no means an easy feat for the film, and if this scene fell flat on its face, the tone for the remainder of the film, would have been laughable, but instead, it was executed perfectly by all involved. The removing of cameras, the car alarm, the dog, the smashing of a car window, the delayed pick-up, everything just fit together perfectly and kept the viewer guessing uncertain of what was going to happen.

We come to understand the type of abuse that Cecilia has suffered at the hands of Adrian and how over time, she eventually was able to feel strong enough to escape his clutches. But after leaving him and prior to his death, she was constantly on the alert believing that he was going to re-appear to torture her. The strength of Moss’s acting is what brings the viewer on such a believable journey throughout this film. The growth we have from her character is outstanding when viewed after the films completion. She goes from the scared woman who was unwilling to leave a safe house with a detective inside to go check the mailbox, to being accused of murder and placed in an insane asylum, before beginning to slow fight back against her abuser. With Moss giving us subtle facial expressions which demonstrate to the viewer the defeat she seems to be feeling in the beginning of the film, before it grows into a quiet strength and a strong resolve in doing the right thing in the closing scenes. Getting to go on this journey with the character who has suffered at the hands of a loved one, and going through issues that no-one should ever have to face, Moss performed excellently for me. The gravitational pull that she had on the film and having to perform without a direct opposite in most of her scenes showed her skill and poise in performing. With her being tortured by an invisible force and needing to communicate with one, the viewer is also able to be convinced that there is something more than meets the eye throughout this suspenseful thriller.

The film has some moments that are beautiful captured and relayed to the viewer expertly. This is mainly due to the camerawork involved in creating a character that is invisible, means that we need to see objects reacting to an environment without having someone physically seen manipulating the object. A couple of these that stood out to me, actually take place one after another, the scenes in the mental hospital when Cecilia is attempting to escape and the invisible force is taking out the security forces, then when they move to outside in the rain. The reason these scenes are memorable is due to the way they were filmed with the invisible figure appearing at moments when the security are shocked to see something in the corridor with them and the impending doom that then registers on their face when it disappears again. By having Cecilia try and warn the groups about what is happening, it only adds to the suspense that is felt by the viewer and our curiosity peaked when trying to determine if anyone will manage to survive. As if anyone who witnesses the creature, they know she is not actually insane and telling the truth regarding the incidents she has faced. With the glitching in and out of sight of the figure, we get the sense of doom and dread, while also being able to feel the horror on the face of the victims when realization sets in.

Then as the scene unfolds and moves to outside the hospital in the lashing rain, I initially thought this was so the figure could escape, until I noticed that the rain was sticking to the clothing. We now have the outline of an invisible haunting figure approaching Cecilia in the dark, choking her, laying waste to all who oppose it, and taunting her with threats. This tied with the atmosphere generated from being outside, the rain pelting down and the score overall, created a setting that encapsulated what the director wanted. Uncertainty and overall helplessness. In that moment, we knew what it was like to be prey hunted by the apex predator who we can do nothing to stop. Our only choice is to accept our fate and embrace it.

As a whole the film was exceptional to me, and since its received such positive feedback there are discussions ongoing for a potential sequel to take place. With The Invisible Woman also getting a future release starring Elizabeth Banks, we are in for potentially more amazing Universal films in their catalogue of monster movies.