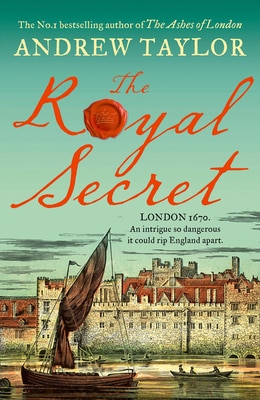 London, 1670. Two young girls, Maria and Hannah, plot a murder by witchcraft. Once, “allies of a sort, united in their hatred of Abbott and his tyrannies.” Later, as Abbott is only a memory, one blackmails another.

Cat Hakesby carries on her late husband’s business as an architect and surveyor. She is commissioned to build a new poultry house for the king’s sister, which requires her to travel to France where the king’s sister resides.

James Marwood is working at Scotland Yard when Richard Abbott, one of Lord Arlington’s clerks, dies. Marwood is set on an investigation of the circumstances surrounding Abbott’s death, and relates his findings to Lord Arlington, Undersecretary of State.

Meanwhile, Marwood and Cat meet once or twice a month to listen to music or go to a play, or go for a walk in finer weather. It’s an alliance of mutual assistance rather than affection as she prefers to keep her independence. After the end of last outing, they don’t make plans for the next time, as they usually would. That unsettles Marwood a bit. “She could forgive his unfortunate liking for low comedy, but not the way he had ogled the orange girl in front of her very eyes. (…) His boorish behaviour towards Mr Fanshawe and his guest had been almost equally bad.” Later, he extends his olive branch by writing her a letter with a plan to see a new play. She curtly expresses her refusal without any explanation. And now, it gnaws at him when he sees Cat with someone he is after.

There is one particular person at the heart of this mystery, but there is a lot of deception and some misjudgment, as well as complications. Besides one being dead, another vanishes, and yet another has a powerful friend. It presents some challenges for Marwood.

The characters come from different directions, and as the story develops they interestingly start coming together, as they happen to be related in some way. The plot is intriguing, culminating with a lot of intrigue and a royal secret unbeknownst to all. Written with marvelous prose sprinkled with humor, the characters of come alive with their settings, vividly presented, and giving a good sense of time and place. The Royal Secret is a beautifully crafted story and atmospheric in its depiction.

This fifth installment in the series reads as a stand-alone. With skillful writing, you can easily follow the characters, which drive this story to the culminating end.