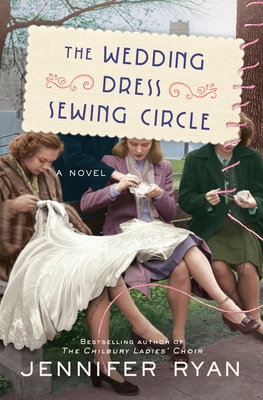 The Wedding Dress Sewing Circle is based on true events – when clothes rationing during WWII leaves young brides in challenging situations, a group of women come up with an idea to start a charity to give out white wedding dresses. In the process, they lift spirits and learn resilience.

England, 1942. In the village of Aldhurst, as Grace is preparing for her wedding, she finds her mother’s wedding dress visibly damaged by moths, and in need of mending. Thus, she seeks help with the Sewing Circle.

In London, Cressida Westcott, a noted couturier, has just lost her home and her design house in the London Blitz. She is forced to seek shelter with her estranged family in Aldhurst. Her family is estranged because Cressida is a woman of strong character, who broke from conventions. The rift is particularly wide between herself and her brother, the late owner of Aldhurst Manor.

Violet Westcott is ecstatic to have her famous aunt at the manor, but at the same time she receives a conscription letter, which is very problematic for her. She is of aristocratic blood and doesn’t like to mingle with lower class people. But the army conscription opens her eyes to her own hypocrisy. How can she hate being told what to do by her superiors, while also be willing to abide by her aristocratic husband?

The backbone of the story is the challenging shortages of clothes during the war, but it is also about one woman helping other women find their voice, rather than follow the path they were put on. As Cressida supports the Sewing Circle with her ideas how to mend dresses, she also gives some women much needed boosts in confidence. And as she does, she encourages women to take chances in their lives. But will she take her chance?

The story weaves a wonderful atmosphere of both the place and its people: the circle of women supporting each other and learning resilience, and in an enchanting way presents the village community. The story also intertwines fascinating historical facts. For example, the view that it was unpatriotic to sit idle. Hands were supposed to be busy with knitting or sewing and supporting either your family or the troops by creating necessary clothing.

Despite the dark side of the war, the warm writing spins a magnificent tale of home-front camaraderie, women coming together and supporting each other, showing that by joining forces you can achieve great things. They also grow on an individual level, forge their own paths, and despite all odds, find love.