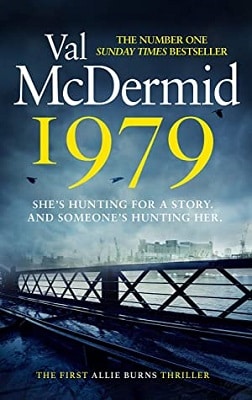 Whenever I see a piece by Val McDermid, I know it will be a rollercoaster ride through the world of thrills and mystery. This series debut was no exception, as McDermid not only introduces the reader to a gritty investigative journalist, but takes things back to a time before the technological breakthrough made journalism a 24/7 reporting game.

Allie Burns is a well-balanced journalist, but has come to realize that working in Scotland in the late 1970s is not as easy as she would have hoped. It’s 1979 and she’s stuck writing about issues that are important to women, rather than getting bloody in the real issues of the day. When Allie meets fellow reporter, Danny Sullivan, they decide to take Glasgow by storm. Their work reveals some real winners, including a tax fraud scheme that is sure to rock the country. However, it is a political piece that could really make a difference, while putting them both in the crosshairs of some troublesome individuals. Allie soon faces a significant setback, but is determined not to let this derail her passion or gritty personality. An intriguing start to a new series for Val McDermid.

Allie Burns had hoped that 1979 would allow her to get off on the right foot, but things were not looking too great. The year started with a massive blizzard and she was tasked with reporting it, as well as sundry other ‘light’ stories that her editor thought she might be able to handle. As an investigative journalist, Allie Burns had hoped to uncover the major stories in and around Glasgow, but she was relegated to the fluff, things that ‘women would want to read about’.

Danny Sullivan had issues of his own in 1979, but it was not a lack of action. Rather, he’d uncovered a major tax fraud scheme taking place, where businessmen could siphon off their money and invest it in an offshore bank on the other side of the world. What’s worse, Danny’s own brother was in the thick of it, making the story all the more delicate. Slow and steady, he told himself, all in the hopes of making the headline and earning a decent byline.

When Allie and Danny began working together, they proved to be unstoppable. Both full of grit and determination, the pair were able to turn up every stone and get to the heart of the matter, impressing editors and readers alike. While they worked on the tax story, news arose about something else in the lead up to the Scottish Referendum on Devolution. Danny made inroads with a group who sought to turn up the heat and bring a little violence to help things along.

Sitting on the story, both Danny and Allie knew they’d need to take action if there was any chance of catching the exclusive. Danny worked from the inside, befriending the group and discovering their ties to the IRA, while Allie used her superior writing skills to pen the story they’d present for publication. It was around this time that Allie learned another secret that Danny had been keeping, one that could really cause him grief. However, this was one story that Allie vowed to keep under her hat.

When the stories broke and the accolades came tumbling in, Allie set about to celebrate with Danny, only to discover that he’d been murdered in his flat. Who could have done such a thing and for what reason? While Allie was well aware that they had both made many enemies, she could not surmise who would want to take such drastic action. Donning her investigative hat, this was one story she’d have to write alone, fueled by the need for answers and a truth that was hiding in the shadows. McDermid does well with this piece, keeping the reader hooked until the final page turn.

While I have long enjoyed the work of Val McDermid, I am usually arriving well after the series has started and playing catch-up. It was nice to get an early peek at this series and see that it is sure to pack quite a punch for the reader and anyone else who takes the time to enjoy it. McDermid has done well to develop the series and keep the reader on their toes throughout. I have high hopes for this novel and the series that is to come.

Allie Burns plays a strong protagonist throughout, though she dies share the limelight for most of the novel with Danny Sullivan. Both have great backstories and find the time to develop throughout this piece. Their connection is primarily with work, but there are personal moments that show a deeper and more meaningful linkage. Complemented by others who grace the pages of the book, McDermid adds characters who matter and whose placement provides a flavor for the narrative that keeps the story on track.

While there are many angles a thriller can take to deliver on crime and confrontation, McDermid always seems able to find a new approach. Readers can revel in that and find something that they can take away for themselves, finding a degree of excitement. The narrative flowed well throughout, keeping the story moving in a forward direction. Characters kept the piece exciting and intriguing, not least because of their Scottish slang that was peppered throughout. McDermid puts Scotland front and center throughout, providing a treat for those who are not from the region. I quite enjoyed the grittiness that emerged as the story developed and cannot wait to see how Allie Burns will emerge into the 1980s, scarred but not broken.

Kudos, Madam McDermid, for another winner. You always seem to find a way to impress me with your writing.