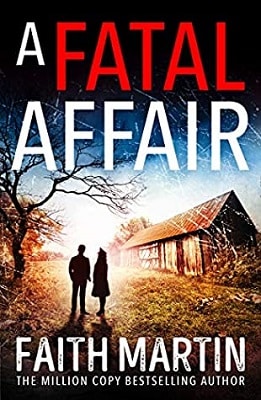 Faith Martin once again knocks it out of the park. In A Fatal Affair, the sixth book in the Loveday and Ryder series, Martin has crafted an excellent mystery, surrounded it with characters and suspects who have depth, and are so well drawn they feel like people you might have passed on the street.

To top it off, she puts everything in an iconic English village that at once feels both familiar and like an idyllic place you’d like to visit. Just one pesky problem on that thought of visiting: someone there has recently murdered a beautiful young girl. Not exactly a welcoming invitation for visitors.

Martin opens the book with the discovery of the body of the soon to be celebrated May Queen, cutting short the celebration. It’s apparent from the beginning this is a murder an investigation is begun by DI Jennings, Trudy Loveday’s boss and number one thorn in her side. As usual, Trudy has not been included in the investigation and is once again relegated to filing and fetching coffee.

Then another death, that of a young man who is the son of DI Jenning’s boss occurs. While all indications are the young man in question committed suicide, Superintendent Finch, his father, doesn’t believe it. He then asks DI Jennings to have Trudy and the coroner, Dr. Ryder, look into his son’s death as he is familiar with their previous successes. As unwelcome as this is to DI Jennings, he feels compelled to honor his boss’s request.

Reluctantly, DI Jennings turns Trudy and Dr. Clement loose to investigate the young man’s death, cautioning her that she is to have nothing to do with the death of the May Queen. Throughout the book, as in the entire series, DI Jennings represents all the prejudice found in the police force toward women in the 1970’s, the era in which this book takes place.

As Trudy and Ryder investigate, it becomes more obvious the two cases are intertwined. The question they must answer is how do they fit together. Is it murder—suicide by a young man hopelessly in love? Is it murder by an unknown person, triggering suicide by a distraught young man? Is it two murders, and if so by one or two people? Lurking behind all these questions is the constant reminder that they are to focus solely on the young man’s death and leave the original murder investigation to DI Jennings.

As Martin takes the reader through the investigation, she also shows Dr. Ryder’s continuing struggle with Parkinson’s, which has been part of the series from the beginning. Is this the book where his illness is going to force his retirement? Will his tremors manifest at the wrong time and betray his secret to Trudy?

The relationship between Trudy and Dr. Ryder has grown throughout the series, and especially for that reason these books are probably best enjoyed when read in order. While the mysteries themselves are complete within each book, and this one is no exception, Trudy’s growth as an investigator and as a police officer is well documented as the series progresses.

Closing in on the end of the book, Martin dials up the tension in a delightful way, which results in urging the reader to read faster in order to discover what is going to happen to all the players in the final few pages. I’m not going to give any hints, as it’s too delightful to experience on your own. I will simply say plan on finishing the last 20% of the book or so at one read if possible; it’s hard to put down.

My thanks to HQ Digital publishing for providing me with an advanced copy of this book for review. The opinions expressed here are entirely my own.