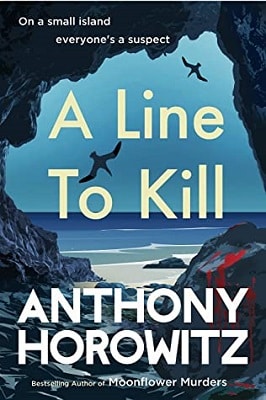 A Line To Kill

Anthony Horowitz is back with his annual whodunit. My attempts at pacing myself were futile, as I knew I couldn’t wait anywhere near October to pick this one up. Horowitz is a twenty-first-century equivalent to Agatha Christie, and I eagerly await more books in this Hawthorne series.

In our third return to the “dynamic” duo, Horowitz follows Hawthorne to a literary festival on a secluded island in Alderney. There are celebrity chefs, casino owners, poets, and professors. The island is in conflict over the installment of a powerline, which creates enemies out of former friends. What originally was just a trip to promote Horowitz’s most recent publication turns into a murder investigation when a corpse is found in the aftermath of a late-night party. Could the death be from the fallout of the powerline debate? Or is this the repercussion of something that had happened decades before?

What makes this series so fun to read is because it’s fun to play along. The mystery itself feels very accessible to the reader, allowing you to make guesses and have your own suspicions throughout the story. Never feel too confident with your accusations though, as it’s always a shifting climate.

Expect locked room mysteries at their finest when picking up this book, I’m glad it strays away from a lot of the police procedural tropes we see a lot. A couple of people on an island, a dead body, and hundreds of red herrings. (And that’s not an exaggeration, you can’t ever be fooled by this book’s misdirection!)

For avid readers of the series, there is also a fair amount of mystery around Hawthorne’s past. I’m sure that there could be a storyline forming over the next few books exploring more of his background? And in terms of Horowitz’s fictional self, I always enjoy reading some updates/stories on Foyle’s War and Alex Rider adaptations.

I think readers know what they’re getting into when they pick up a Horowitz book, and his endings never fail to entertain me. Keep an eye out for everyone and everything, as I can guarantee you, everyone does have a secret in this novel.

Thank you Harper books for an advanced reader’s copy!