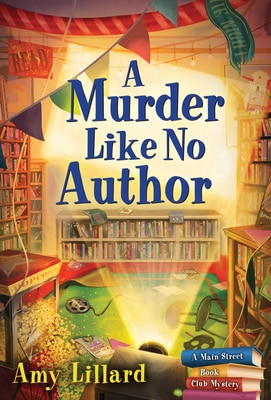 Arlo, central character in the Main Street Mystery series by Amy Lillard, is busy herding cats. Not literal cats, but the three members of her so-called book club.

Trying to get these senior citizen women to actually read books and discuss them like, you know, a normal book club, is just like trying to get a cat to stay off the furniture. They are going to do what they are going to do, and in this case that means try to solve the latest murder in the small town of Sugar Springs, MS.

The murder itself is contained within the book, but the story of its author and the development of the book have threads that go back to the previous books. That may not matter to most readers, as it is enjoyable either way. In fact, if you read this as your first introduction to the people of Sugar Springs, you may be so entertained you decide to go back and read the other two books.

The book opens with the murder of a famous author from Sugar Springs whose last book before his death has been turned into a movie. The Hollywood movers and shakers have decided to have the premier in Sugar Springs and the book club ladies, lead by Helen, are the main volunteers working to get the coliseum spruced up for the event. Unfortunately, Helen has barely started work that day when she finds the body of the man who has come to town claiming someone else had actually written the book. She calls Arlo who rushes down along with the other book club members. Chaos ensues as the women decide to investigate and Mads, chief of police, demands Arlo get them under control, thus the herding begins. Arlo’s attempts to control three 80+ year old women  are hilariously believable for anyone who has tried to reason with a strong willed senior citizen.

As the book club, along with Arlo, rush around town in search of clues, they constantly ignore not only Mads’ directives, but any thought of leaving evidence alone. Arlo has her hands full trying to keep them off the balcony where the victim was pushed; out of the victim’s room at the B&B owned by Helen, even though there is crime scene tape sealing the area; not to mention making copies of half a note they find written in what appears to be Russian.

The mystery is well plotted, and there are plenty of clues for the reader to use in solving it if they don’t get too tangled up in the humor of it all. The characters are well-crafted and unique as is the depiction of a small southern town. Passages throughout the book reveal an author who understands the south and what living in a small southern town is like. For example,there is the description of a gathering after the naturally occurring death of one of the characters which measures the townspeople’s admiration of her  by “the number of casseroles, pies,and mayonnaise-based salads” that have arrived.

As the book club ladies run around town, gathering clues and questioning people. Arlo is left to frantically run behind them, trying to get them back to the bookstore she owns and the area she set aside for the book club when she had what she thought was an inspired idea. In between investigative tasks, the women can be found in the coliseum, painting, dusting, and polishing the floor. That is until a wayward beam falls and Arlo has to take a dive to push one of the women out of the way. The result is a broken ankle for Arlo, so she winds up doing much of  her herding with her right leg in a knee high cast.

Enough about the plot and interactions, trust me, it’s more fun to read them as they happen than to read a description of it. This is a cozy series not to be missed as it has it all: a central character with her own conflicts, a senior citizen group that is nothing if not laser focused, a handsome chief of police who once had a thing with Arlo and the man who, as a teenager, broke them up on prom night. Oh, yes, it also has a well plotted murder mystery and excellent pacing that keeps pulling you through the book until you are surprised that the whole thing is over.

I received an advance copy of this novel through Poisoned Pen Press and NetGalley. The opinions stated here are entirely my own.

A Murder Like No Author available at:
Amazon
Books-a-Million