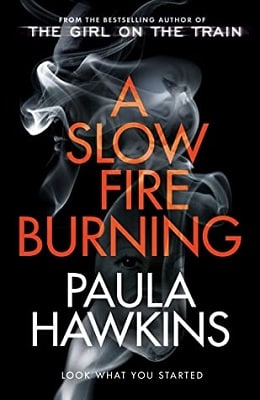 A Slow Fire Burning, the latest from Paula Hawkins, is about a young man found brutally murdered on a houseboat. The story follows Laura, a career criminal with a traumatic brain injury, who has a one-night stand with the victim the night before he dies.

There are a plethora of characters, many with their own chapters, including: Miriam, the woman who found the body, who has secrets of her own; Theo and Carla, a divorced couple, who have been through their own tragedy; and Irene, a gentle older woman who lives next door to Angela, a drunk found dead several weeks before her son, the murder victim on the houseboat. With the exception of Irene, every character is more unlikeable than the next. Yet Paula Hawkins is a genius at taking unique characters and interweaving their stories from each perspective.

Theo and Carla Myerson used to be a power couple. Young, successful, with a beautiful son, it is all taken away from them in the blink of an eye when their child falls to his death on a sleepover with his aunt and cousin. Theo, once a successful writer, could write nothing substantial for years after the tragedy. Carla, an accomplished businesswoman, no longer has the energy to put into work she once had. It has been years since their son, Ben, died and they have divorced. It has estranged both from Angela, Carla’s sister, whom they blame for Ben’s death and Daniel, her son. When Angela dies unexpectedly and then her son, Daniel, dies a few weeks later, it throws Carla into a depression she can’t seem to get out of. Though at the time of death, she is not close to either of them.

Hawkins’ book goes back and forth between a tragedy that happened 35 years ago and Daniel’s death today. Some flashbacks are Miriam’s memories, and some are a book that Theo has just written about the tragedy, perceivably stolen from Miriam’s unedited manuscript.

There are so many sub-plots in this novel that attention to detail is a must, along with keeping all the characters straight. All of them lead back to the death of Daniel, and the actual murderer remains a surprise until the very end. There are some “triggers” in this book that may upset readers, including child death, negligence, and incest. Still, A Slow Fire Burning is a book that keeps you on the edge of your seat and not one you will easily put down.