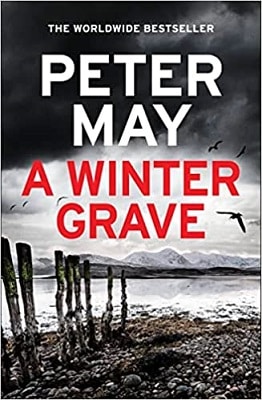 Peter May’s new thriller is a gripping tale of murder and betrayal in a dystopian Scotland suffering from catastrophic climate change.

It’s 2051 and after decades of inaction on climate change, large swathes of the world are either already under water or too hot for habitation with governments unable to cope with the resulting famine, death and mass migration. Due to the melting of polar ice causing disruption of the Gulf Stream, the Scottish Highlands now experience increasingly ferocious snow and ice storms. These are monitored by local meteorologist Addie Sinclair from weather stations set on top of the mountains around Loch Leven. Whilst out checking one of her stations, she discovers an ice tunnel has formed in a corrie or hollow on the side of the mountain and exploring it further is shocked to see a man’s body trapped in the ice above her head.

The body is recognized as that of investigative journalist George Younger who went missing three months ago from the isolated village of Kinlochleven, while supposedly out walking in the mountains. Detective, Cameron Brodie, an experienced mountain climber is sent from Glasgow with pathologist Dr Sita Roy, to Kinlochleven to investigate his death. It’s now winter and the village is a bleak place with no tourists or visiting workers from the nearby nuclear power plant, and only a lone manager keeping the hotel open.

While Dr Roy’s autopsy finds evidence that Younger was assaulted on the mountain, she also discovers puzzling signs of damage inside his body that will have to wait until she gets back to her hospital to analyze. However, with another major ice storm cutting off power and communication with the outside world, Brodie and Roy find themselves trapped with no means of leaving and a killer on the loose planning to hide all evidence of Younger’s murder and whatever it was he was investigating. Brodie also has personal reasons for coming to Kinlochleven and demons of his own to deal with. In addition to his failing health, he is forced to face the mistakes of his past while he still has a chance for some reconciliation.

Peter May’s futuristic vision of 2051 is totally plausible, with its mix of new inventions and catastrophic environmental and geopolitical changes. The bleak and rugged atmospheric setting of the icy cold Scottish mountains and Brodie’s struggles battling blizzards generates a feeling of entrapment and claustrophobia, making Brodie’s search for what was important enough to get Younger killed tense and riveting reading.

The novel is sparsely populated with main characters; Brodie and Roy, Addie, the meteorologist,  married to Robbie Sinclair, the local, friendly policeman and Brannon the shadowy and often missing manager of the mostly closed up hotel. All have their flaws and secrets but are real and very credible. The suspense builds gradually as Brodie starts to work out what might have been important enough to get Younger killed and the characters roles in that revealed. While the futuristic setting might indicate a change in direction for May, he’s right at home in his vision of a futuristic bleak and wintery Scotland and delivers everything we’ve come to expect from him in this compelling thriller.

A Winter Grave is available at:
Amazon