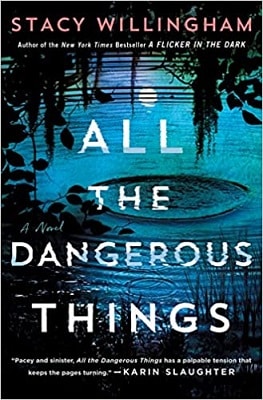 All the Dangerous Things

All The Dangerous Things is the sophomore novel of Author Stacy Willingham. I became a fan of this author’s work last year after reading and reviewing her stunning debut novel, A Flicker In The Dark.

Willingham’s ability to finesse both characters and readers through a complex plot line with an extremely unreliable protagonist at the helm is highly impressive and evident in both books. I’m delighted to say All The Dangerous Things meets the high standards set in A Flicker In The Dark. As much as I enjoyed that book, I appreciate this one even more.

It’s been a year since Isabelle Drake allowed herself to sleep through the night. A year since her young son Mason was abducted from his bed under the cover of darkness with both she and her husband sleeping right down the hall. The kidnapping case has gone cold, and Isabelle’s husband has moved on and is flaunting a new girlfriend around town. And now it’s clear everyone thinks it’s time for Isabelle to move on also. In short, the people surrounding Isabelle believe she’s delusional and from all appearances, she is. She’s been plagued with insomnia since childhood, and in the past she experienced episodes of sleepwalking. Now she’s finding it difficult distinguishing reality from the unrelenting parade of mirages taunting her in her foggy, dreamlike state. She keeps Mason’s name and picture in the news by guest speaking at True Crime conferences around the country where she is approached by Waylon Spencer, a True Crime podcaster, who convinces Isabelle to commit to a series of live interviews on his podcast. As this story unfolds, it becomes clear to readers that there’s more going on here than meets the eye – in both Mason’s disappearance and Spencer’s intrusion into Isabelle’s life.

Narrated solely by Isabelle, All The Dangerous Things is a highly atmospheric, intricately plotted story that is presented through dual timelines – the present and flashbacks to Isabelle’s childhood where dark secrets are lurking in the hidden recesses of Isabelle’s frail mind. As bits and pieces of buried memories surface, she’s in danger of losing her precarious handle on reality. Readers are kept scrambling for answers as they also question what’s real and what’s an illusion, and the rising tension is so thick you can cut it with a knife. A couple of super creepy sleepwalking scenes caught on camera literally made the hair on my arms stand up. Characters are wonderfully original and well developed including several plausible red herrings. While I figured out a couple of things on this wild journey through pages of smoke and mirrors, I didn’t see the final shocker coming until the monster reveal.

All The Dangerous Things is a dark psychological thriller that explores the devastation wreaked on humans while experiencing unbearable grief, guilt, stress and trauma and the manner in which it erodes one’s mental health and ability to make wise life choices over time. Through expert manipulation of emotionally damaged characters, a highly unreliable narrator and a multi-faceted plot line, Willingham has once again proven herself to be an author to watch – one that has moved to my auto-buy list as her books now reside among my favorites on a star-studded Thriller Shelf occupied by the likes of Karin Slaughter, Lisa Gardner and Loreth Anne White. I’m highly anticipating the next release by this talented author and recommend All The Dangerous Things to fans of suspense and psychological thrillers.

All the Dangerous Things is available at:
Amazon