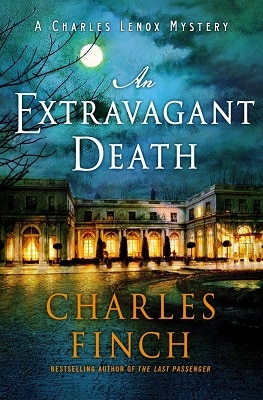 America, 1878: a kinder, gentler place? Not based on the observations of Charles Lenox, celebrated English detective who makes his first trip to America in An Extravagant Death, the fourteenth book in the series by Charles Finch. He does make frequent comments about the differences, though, from the displays of opulence among the rich to the more casual behavior and conversation of the people. It is most definitely not England.

Finch does an excellent job of weaving these differences between English and American societies—as seen through the eyes of Detective Lenox—throughout the book.  Most of the story takes place among the wealthy families who have “cottages” in Newport, RI. These cottages are the huge estates belonging to America’s wealthiest families from New York. The families, we learn, are divided into two segments: the “Knickerbockers” descended from the old Dutch families who first settled the area, and the “new monied” people who made their fortunes as captains of industry or commerce. The social divide doesn’t play into the book in a big way, however it does allow Finch to talk about the difference between English and American social structure, and at the same time show the occasional sharp divide between “old” and “new” money.

Lenox has travelled to America at the request of Prime Minister Disraeli because his testimony in a case in England might prove embarrassing and cause political problems for Disraeli. He asks the detective instead to file a written testimony and then travel to America, sweetening the deal by offering him perks like a knighthood, and the chance to travel under the queen’s seal.

Lenox, who was initially reluctant to leave his family, succumbs to the lure of travel and accepts, which puts him in America at the same time a young woman (who is celebrated for her beauty) is murdered during one of the balls being held in Newport. At the beginning of his trip, he is contacted about investigating the murder by the patriarch of one of the wealthiest families. At the same time, he is approached by the youngest son of the family asking if he can shadow Lenox in his investigation. The son, Theodore, Teddy, appears earnest in his stated desire at becoming a detective, and shows aptitude at finding information. In addition, as a member of the upper echelon, he can occasionally get doors to open for Lenox that would not normally swing wide for a mere detective. Although he is not drawn by the money offered him, Lenox does feel a responsibility to see justice done and agrees to hear a plea for his services. Once in Newport he gets caught up in the investigation, and determines to solve the murder.

Throughout the investigation Lenox encounters various Americans from all walks of life, and makes small comments regarding the differences between the Americans and the English. The upper-class Americans are observed to have visible wealth in the form of jewels, art (often

purchased from the English), opulent dining areas and elaborately planned balls, in other words many outward signs that point to just how wealthy a family is. The English, on the other hand, have vast land holdings and often little else. Thus, many of their outward trappings of wealth have been sold to the Americans because they are required to maintain their ancestral lands; but frequently don’t have the money to do so.

In addition to the wealthy people Lenox meets, he experiences life as a more middle class American might. He stays in an inn in Newport rather than in rooms offered by one of the wealthier residents. He also travels through the town, making observations about both the wealthy area where the estates are built as the exclusive domain of the families who reside there; the town of Newport, the shopping district and the homes of the local people there; and the fishing village which is on the opposite side of the island. The pace of life is considerably slower than modern day. For example, the primary mode of local travel is walking and the occasional carriage, depending on which is most suitable at the moment.

There is a sharp twist when the mystery is solved, one that may or may not be expected by the reader. In either event, knowing how the story resolves doesn’t affect the enjoyment of the book. After the solution to the mystery is revealed, the story continues for a short while, bringing to a close a number of storylines. This serves almost as a final dessert mint to a delicious meal might; just enough to leave the palate cleansed without interfering with the overall satisfaction of having consumed an excellent dinner.

For any reader who is looking for an excellently-crafted mystery, written in superb style that provides them with the proverbial chance to sit back and relax with a good book, this might be just what they want. It’s also ideal for anyone who enjoys books written in the style of the golden age of mystery with its slightly more formal prose, limited details regarding bodies, etc., and overall manners that reflect a more formal time.

I thoroughly enjoyed this book and would like to thank St.Martin’s Press Minotaur Books and NetGalley for providing me with an advanced digital copy to review. The opinions stated here are entirely my own.