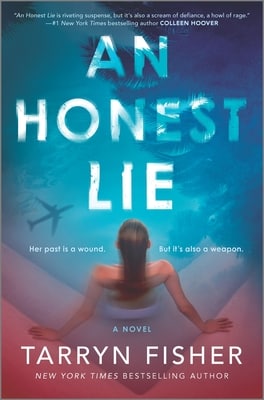 “‘A story is not always a lie,’ said Tristan. ‘Some stories are truer than truth.’

Truer than truth? That sounded like something liars made up to tell people who found them out.”

Tarryn Fisher knows how to write suspense. This book was hard to put down. An Honest Lie is my first book by this author and I can’t wait to read through her bibliography.

Rainy is a child when her father dies from addiction and alcoholism. Her mother, Lorraine, with nowhere to go and very little money, looks up an old friend who offers to put them up in his house in Nevada. What Rainy and her mother don’t know is that Taured is the leader of a cult. As they arrive at the women’s federal prison in Friendship, Arizona, they find Taured and his followers, who have turned the prison into a compound for his “family”. When her mother dies under mysterious circumstances after a failed escape, Rainy knows she must get out. When she finally escapes, at 15, the trauma is almost too much to bear.

Fast Forward to many years later and Rainy is a famous sculpture artist in NYC, constantly looking over her shoulder to make sure Taured has not caught up with her. When she falls in love with Grant, an architect, she moves to Tiger Mountain in Washington state (my hometown!). Grant introduces her to a group of women that he has been friends with since high school. Rainy calls them the tiger wives. While she is wary of some of them, she agrees to a girl’s weekend in Las Vegas, though she had sworn never to go back to Nevada. She soon finds out that the entire weekend is a big mistake, as the girls ignore her after the first night. One girl, Braithe, didn’t return the last night. When Rainy receives a disturbing text from Braithe’s phone, she realizes someone has kidnapped her, but the kidnapper really wants Rainy.

An Honest Lie is told via alternating timelines: then & now, with Rainy narrating. Her narration of “then” is about growing up in a cult and how it formed who she is now. The story of “now” is what happens in Vegas, which is the majority of “now”. Both timelines are equally fascinating and it really drew me into Rainy’s past. However, I found the perpetrator to be a reach, as far as who they were to Rainy. It was confusing why he was doing what he was doing and what his connection to Braithe was. I felt that needed more explanation.

While this book is amazing, and I really enjoyed it, parts of it were confusing. For example, one of the “tiger wives” that goes on the trip is obsessed with Rainy’s boyfriend, Grant. While this plot Point is discussed frequently throughout the book, it doesn’t really add anything to Rainy’s story. The author has written a strong and complex character in Rainy, and while the focus was on her, there were strange little side stories I felt didn’t belong in the book. The last couple of chapters are fast-paced and suspenseful and I loved that, but the ending left me wanting more.

An Honest Lie is available at:
Amazon