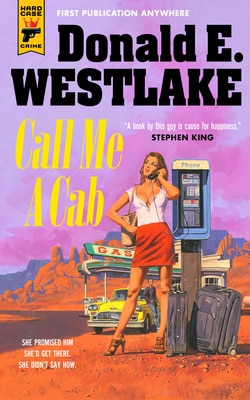 Call Me a Cab

Twenty-nine-year-old Katharine Scott, suitcases in tow, is headed to Kennedy airport for a flight to LA, where she’ll have to tell the man she’s been putting off for years whether or not she’ll marry him.

Approaching the terminal on the Van Wyck Expressway, she panics. “I told Barry I’d make up my mind by the time I got to Los Angeles, and I promised him I’d leave today, but I just can’t do it in five hours. How long would it take to drive there?”

As it turns out, about a week.

Over the course of the drive, we learn that Katharine, already a nationally renowned landscape architect, is sharp, driven, assertive, and decisive. How can someone so sure of herself, Tom wonders, be so unsure about committing to the man she clearly loves?

Tom’s easygoing disposition is the antidote to Katherine’s drive and determination. Without lofty goals or preconceived notions of success, he lets life happen to him. Around the same age as Katharine, he once played life by the book, marrying straight out of college and taking a corporate job. After the marriage and the job fell apart, he found himself much happier as a single cabbie, in charge of his own life and interacting with people from every stratum of society. His education and life experience give him insight into Katharine’s dilemma and psychology.

As in any travel story, our protagonists have a number of adventures and meet many colorful characters along the way. These characters and events are not throwaway gags meant to liven up a wandering tale. Each leads Tom and Katharine to new insights into marriage, human relations, and their own psychology. Many contribute to the enlightenment that informs Katharine’s final decision.

After publishing his initial draft in Redbook, Westlake continued to flesh out and revise the novel, which languished unpublished until the author’s daughter and his agent brought it to the attention of Hard Case Crime editor Charles Ardai. Hard Case published the book in February, 2022, noting that it will probably be the great author’s final published novel.

Call Me a Cab is in part a study of two characters with opposite attitudes toward life. In part, it’s a suspense story hinging on a woman’s life-altering decision, with a surprising and satisfying twist at the end. It’s also a time capsule of 1970s America, with its phone booths and Checker cabs, CB radios, cheap diners, and the dawning homogenization of rural highways with identical chain hotels and restaurants in every state.

The book’s true value lies in the way it captures a social moment in the county’s history. By the mid-1970s, the college students of the turbulent sixties were starting to make their mark as adults.

“When I was a little girl,” Katharine tells Tom, “what I wanted to be was a wife and mommy, like everybody else. Then, around the time I want to college, the world opened up a little and it was all right to think of alternative futures…”

She chose one of those alternative futures, a career that had formerly not been open to women, and every part of her flourished in a role that demanded both creativity and responsibility. But in town after town on their cross-country tour, Tom and Katherine find that attitudes and perspectives have not caught up. Hotel clerks always assume they’re a couple, because what other relationship could exist between a man and woman? Waiters always ask Tom for the order and always present him with the bill.

However far Katherine may have come, the world around her can only see her in terms of traditional roles that are so ingrained that even Katharine herself, while living outside them, doesn’t understand how they’ve constrained her thinking until the very end.

America today is going through a cultural shift similar to the one unfolding around Katharine and Tom, as individuals shed the constraints of old roles, old prejudices and stereotypes, often against the fierce resistance of traditionalists.

Westlake’s novel portrays the friction of a whole person emerging into a society that’s not fully ready to receive her, and it does so without the rancor and hostility that cloud today’s culture wars. The author simply presents an intelligent, emotionally healthy, psychologically mature woman who wants to choose her own path. To know her is to root for her.

While the book does occasionally come off as having a political agenda, it’s more than balanced out by the wit of sharp dialog between Tom and Katharine, and by Tom’s deadpan narration of events as mundane as checking in to yet another roadside Holiday Inn. “The young couple on duty at the desk in his-and-hers yellow blazers were having an affair; they were practically having it in our presence.”

While parts of the story feel contrived, and some of the minor characters feel dated, these flaws aren’t enough to dampen the pleasures of a character-based novel that has at its core two richly drawn characters.

Call Me a Cab available at:
Amazon