In Tom Clancy’s Patriot Games, an unsuspecting Cathy Ryan—surgeon and wife of the CIA’s Jack Ryan—is driving a beautiful Porsche with her daughter riding shotgun beside her. Ryan catches something in her peripheral vision.

A van has come alongside them, too close. The side door of the van slides open and suddenly there’s a white flash. An automatic weapon, operated by a terrorist who has come to America for revenge, attempts to make swiss cheese out of the woman and her child; and in the panic, in the race to escape, Cathy loses control of the car and crashes hard. Her daughter’s life changed forever.

For many of us cars represent a rite of passage—freedom, empowerment, and at times escape. That driver’s license is like a get out of jail card for some, a plane ticket for others. The car is the setting for that first kiss, that first speeding ticket, the bored ride in the backseat while your parents listened to “their” music on the way to the shore. It’s what took the life of one of your friends who drove too fast that night. It’s what you nervously strapped your firstborn into for the ride home from the hospital.

In mystery, suspense, and crime thrillers, authors have exploited all of those elements and then many more.

Some people look to cars strictly as a means to an end. How to get from A to B. Others treat their cars like one of the family, doting over it, washing and waxing it every chance they get. Some modify cars and race them, experiencing the thrill of speed, the adrenaline rush of the hard earned pass or the pucker of a crash that could have killed them.

Exploiting our fears and vulnerabilities and using vehicles as the stage has been the work of fiction writers for as long as I can remember. C.J. Box, with the success of his novel The Highway and its recent adaptation for television, is one author who touches the nerve of anyone who’s ever been afraid behind the wheel or feared for a loved one who should have been home by now. Tony & Susan became the film Nocturnal Animals that reminded anyone who has ever driven late into the night on deserted roads that despite being at the wheel, you are far from being in control.

In some cases writing has allowed authors the creative license to spotlight their personal passions. The late Clive Cussler, a classic car collector and bestselling author, made a Rolls Royce the centerpiece of his novel The Gray Ghost. In other cases, some write about auto racing in hopes young readers will abandon video games and Ubers and get behind the wheel of something truly exhilarating – something that will make you feel, smell, hear, and experience the joy and rush of adrenaline and leave you wanting more.

Authors and then film directors have taken what some regard as the safety or freedom of owning and operating a motor vehicle and scared the heck out of us. Much like the sound heard in the bedroom closet, the noise under the bed, the creaking sound of someone creeping up the staircase only more. They take what should be our safe places and show us how vulnerable we really are, at least in their creative hands.

A friend took me to an auto race at Pocono and I was hooked. I went on to study Journalism and Law Enforcement at Penn State but traveled to events on weekends as a freelance writer and photographer for motorsports magazines. When opportunity knocked I went to work full time with a NASCAR team and then to spend the next forty years traveling the world for VP Racing Fuels. Given the chance to retire early and get back to writing full time I went for it. My latest thrillers The Export, The Export’s Revenge, and Deadly Driver all launch this summer.  For more information visit JKKelly.com 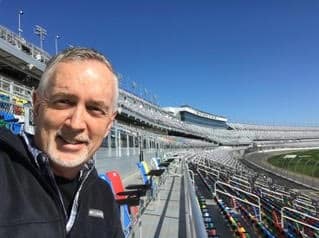