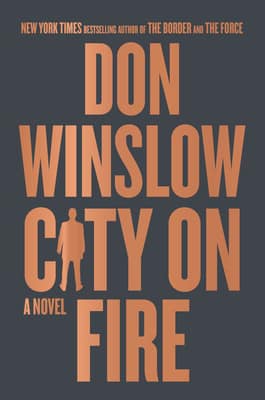 “How they had fought each other, these two immigrant tribes, for a place to put their feet. The Irish in Dogtown, the Italians on Federal Hill, toeholds carved out of grudging New England Granite. The Old Yankees hated the slick micks and greasy guineas, the bogtrotters and dagos who came to ruin their Protestant city with their Catholic saints and their candles, bleeding effigies and incense-swinging priests” –City on Fire, Don Winslow

City on Fire is spectacular. A crime fiction of massive proportions along the lines of the classic movie, Goodfellas. I can almost hear Ray Liotta’s voice narrating as I read about Dogtown and the Irish war with the Italians. There is suspense, interesting well-developed characters and a lot of emotion. It is both breath-taking and cinematic. Even with the opener with all the Irish on a beach vacation, you can feel the atmosphere of the small beach town, the friendship and love between the families, and the camaraderie between everyone. Even as you are thrown into a gang war between the Irish and Italian in Providence, RI circa 1985.

Don Winslow attributes this book to Ancient Greek satire with the anti-hero, Danny Ryan. Not a flawless individual, but someone the reader wants to root for, nonetheless. They decide for everyone around them rather than just for themselves. These decisions play out importantly at the tail end of this novel. Danny Ryan, whose father used to control the Irish syndicate in the upper south side, known as Dogtown, has married into the Murphy family, thinking that he would move up in the notorious crime family he is now a part of. He chronicles his journey through his start at the bottom to eventually being one of the top men. When his brother-in-law fondles the girlfriend of a made Italian man, it triggers a war that will eventually destroy two families. Relations between the Irish and Italian have been quiet for decades until this one disrespectful moment disrupts the harmony in an instant. Pamela, a bombshell from Connecticut, is the instigator for this war. The way the author introduces her in the first sentence of this book is brilliant.

Danny Ryan watches the woman come out of the water like a vision emerging from his dreams of the sea. Except she’s real and she’s going to be trouble. Women that beautiful usually are.

City on Fire is impressive. Don Winslow can write a story that will completely immerse you in a world of mobsters, wise guys, and the good guys, who despite their best intentions, never remain so. This book is told from multiple points of view and the dialogue is authentic, if not perfect, from our narrator; an Irish working class man from Rhode Island. As with most “Godfather” type fiction, the common themes are honor, cowardice, loyalty and betrayal, but with writing that makes this book not to be missed.

The subject of the mafia is quintessential in American Culture. We think of The Godfather saga and The Sopranos television series but City on Fire definitely hits the mark. This will be a trilogy of books, with City on Fire to debut in April of next year. This book must not be missed.

City on Fire is available at:
Amazon
Books-a-Million