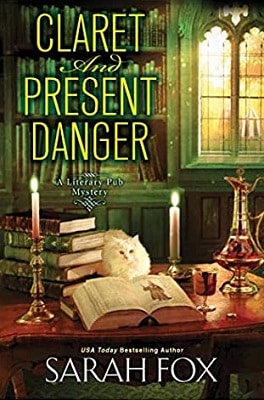 Readers of this series will be excited to see central character Sadie Coleman once again get involved in trying to find a killer. In this book, a Renaissance Faire has come to town, complete with jugglers, musicians, a fortune teller and a few non-Renaissance type acts such as an illusionist/magician and a mermaid tank.

No matter that it isn’t completely true to the idea of a Renaissance Faire, the people of Shady Creek, VT. are still enjoying themselves. That is until the illusionist is murdered in the middle of his act and Sadie witnesses the whole thing.

If witnessing a murder isn’t bad enough, the police settle on Damien, one of Sadie’s employees as the murderer. When they find a plant growing on his property that is the same type as what was used to commit the murder, they promptly arrest him, and this is enough to spur Sadie into action. Although cautioned to let the police do the investigating, Sadie begins her sleuthing, wandering around town and in Faire grounds, asking various people questions. Things get even more serious when another of the Faire’s employees is murdered and Sadie hopes this will demonstrate Damien’s innocence. When this doesn’t happen, Sadie increases her efforts to find the killer.

While Sadie continues to investigate, looking at various people and what their relationships were to the deceased, her social life continues to develop. There has been a slowly developing relationship between Sadie and Grayson, the local distillery owner and this continues to grow. In addition, there are a few other relationships mentioned, although nothing major changes within Sadie’s immediate circle.

The mystery is straightforward and complete within this book, with Sadie pursuing various leads as she gets closer to the solution through her investigation. The pacing is a bit uneven, and the solution to the murder hinges on one small statement Sadie overhears for a second time, solidifying her belief regarding the murderer. As in previous books in this series, Sadie’s suspicions lead her into jeopardy and she is briefly threatened by the murderer before reinforcements arrive.

Readers who have invested in this series already will likely enjoy the book the most, as they are invested in the lives of Sadie and her friends. If a reader is new to the series, their interest may be increased by starting with the first book in the series and reading them in order. Secondary relationships are as much a part of this story as the mystery itself. Newcomers to the series who read this as a stand-alone may find the characters lacking in depth since much of their development has been done in earlier books in the series.

An advance copy of this novel was provided by Kensington books. The opinions expressed here are entirely my own.