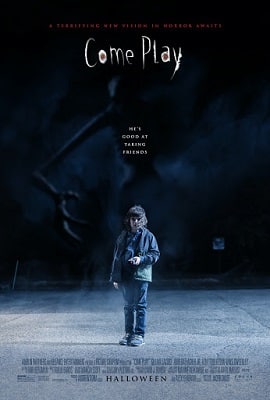 Come Play is an ambitious film that attempts to tackle the topics of isolation, bullying, and modern technology through the lens of a monster story. I applaud the creativity, but the actual execution was not up to par. This film is by no means a bad movie, but it’s certainly nothing to write home about. It is just okay.

This creature feature stars Azhy Robertson as Oliver—an autistic boy targeted by a monster from another world—and Gillian Jacobs and John Gallagher Jr as Oliver’s parents, who are trying to save their son. Overall, the film is well acted, with Robertson giving a particularly good performance as Oliver. He embodies every essence of the character, while not making Oliver seem like a charcuterie of tics and mumbles. This film had a lot of potential, but ultimately fell flat due to underdeveloped themes and ideas. I think Chase had a clear message he was trying to portray through the film, but it gets jumbled up in the uneven tone and lost in an over-reliance of jump scares and sound effects.

My main issue with the film is that it is not actually scary. It has all the trappings of a scary movie, but then none of the scares. Chase does a good job of setting the tone with music and sound effects, and even the camera pans and angles to really build up the mood for that crazy, adrenaline-rushing scare you know is coming but still scares you anyway. Except when the actual fright comes it is just underwhelming. The buildup was more frightening than the actual event.  And don’t we watch scary movies to be scared?

Would I recommend this movie? Sure. Like I said before, it’s not a bad movie. I would recommend this film for a younger audience that enjoys the horror genre, but don’t want to see something this overly violent, bloody, or gory. This is a good kid-friendly horror movie. It is sort of like a twisted fairy tale. Also, if you are a fan of the horror genre in general, you might enjoy it.

Bottom line: Come Play has good elements. They just don’t all work together all the time. But, I will say this film was better than I expected, so why not give it a watch? You might be surprised.