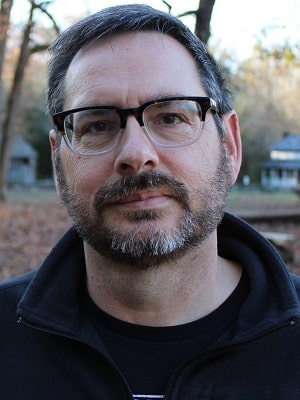 Award-winning author of Spoonbenders, We Are All Completely Fine, Afterparty, Pandemonium, and others. He’s won the World Fantasy Award, as well as the Shirley Jackson, Crawford, Asimov Readers, and Geffen awards, and his work has been short-listed for many other awards, including the Nebula. His books have been translated in over a dozen languages, and have been named to best-of-the-year lists from NPR Books, Publishers Weekly, Kirkus, and Library Journal.

Q. The Album of Dr. Moreau is a unique mashup of the H.G. Wells classic and murder mysteries. How did you come up with the idea to mesh boy bands with a locked door mystery?

Daryl: It started with a car ride with Dave Justus, one of the funniest people I know. We were trapped in a car between San Antonio and Austin, and we were spitballing funny titles, and I told him I’d always wanted to write “The Album of Dr. Moreau,” and from there the jokes and puns just started flying. At first the animals were going to be in a metal band, and some of the jokes were filthy. Those will stay between me and Dave.

When I eventually got around to writing it, I was thinking of the boy bands my daughter fell in love with when she was ten – especially The Backstreet Boys and NSYNC, who were both managed by the same guy who eventually went to jail for fraud and generally seemed to be an awful person. I bet at least one of those singers wanted to kill him! My band of animal-human hybrids would be the WyldBoyz, and Dr. M would be their manager. He’d die in chapter one, and we’d be off to the races.

I’d always loved Agatha Christie and locked room mysteries, but I especially loved the structure of books like Murder on the Orient Express and Death on the Nile. A bunch of vibrant characters are penned up together, and the secrets start spilling out. I stole that setup, but instead of a boat or a train I chose the penthouse floor of a Las Vegas hotel.

Q. Do you think science fiction and speculative fiction lend themselves to mysteries?

Daryl: SF and mystery are clearly close relatives. Writers have moved between both genres—think of Kate Wilhelm’s mysteries, or Asimov’s Black Widowers series—and readers do, too. There have been SF mysteries since the beginning. One of the first SF books I read was Asimov’s robot detective novel, The Caves of Steel.

Both genres present the world as a puzzle to be solved, and readers have to actively participate in ferreting out clues. A sentence such as “The sky switched off at 7pm” might be a metaphor in a mainstream story, but in an SF story it’s important information. SF readers and mystery readers are “fault tolerant” in that they don’t need everything to be spelled out in the first paragraph. If some detail doesn’t make sense at first, that’s part of the game.

Q. Besides writing, you create comics and games. What are some of your biggest successes?

Daryl: A few years ago I worked on the Lifeline games, which for legal reasons can’t be called “choose-your-own-adventure” games but the structure is similar. In fact, Dave Justus, wrote all the most popular Lifeline games. I loved the sheer difficulty of learning how to tell branching stories. My comics work is pretty scanty, but I’m proud of the Planet of the Apes series. They pretty much let me write whatever I wanted in that universe (the “classic” POTA universe that I grew up watching), and I got to work with Carlos Magno, one of the best artists working. The trick with comics is to write few words, and let the art carry the load!

Q. What are some of the biggest challenges in writing cross-genre sci-fi novellas/books?

Daryl: The challenges make it joyful. I’ve never had as much fun writing a book as I have with this novella. The challenge I set myself was that the story had to be three things at once: a legitimate fair-play mystery, a real SF story, and a comedy. So, fair-play meant that the reader had to have all the clues the detective did, and therefore a shot at solving the mystery on their own. A “real” SF story means that the science fictional premise has to be integral to the story and to the conclusion. The solution of the mystery can’t be something not tied to the premise. And the comedy… well, comedy is just hard.

Daryl: Writers hate this question. It’s like walking out of the hospital with a new baby in your arms, and somebody says, Okay, cute kid, but when are you going to have the next one?

But as it happens, there are a few things in the pipeline. My 1940s Appalachian horror novel, Revelator, will be out in August of 2021. And I’ve got television projects to work on. Showtime has committed to a pilot for my novel Spoonbenders, and there’s another thing in the works I can’t talk about yet. But I don’t think I’m done with the WyldBoyz yet. I’d love to write about their reunion tour.

Daryl Gregory’s The Album of Dr. Moreau combines the science fiction premise of the famous novel by H. G. Wells with the panache of a classic murder mystery and the spectacle of a beloved boy band.

It’s 2001, and the WyldBoyZ are the world’s hottest boy band, and definitely the world’s only genetically engineered human-animal hybrid vocal group. When their producer, Dr. M, is found murdered in his hotel room, the “boyz” become the prime suspects. Was it Bobby the ocelot (“the cute one”), Matt the megabat (“the funny one”), Tim the Pangolin (“the shy one”), Devin the bonobo (“the romantic one”), or Tusk the elephant (“the smart one”)?

Las Vegas Detective Luce Delgado has only twenty-four hours to solve a case that goes all the way back to the secret science barge where the WyldBoyZ’ journey first began—a place they used to call home.