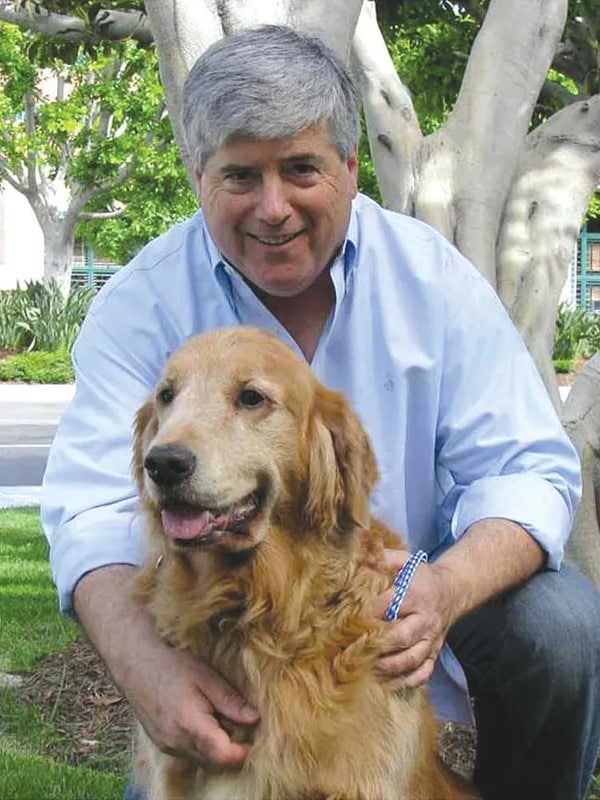 David Rosenfelt, a native of Paterson, New Jersey, is a graduate of NYU. He was the former marketing president for Tri-Star Pictures before becoming a writer of novels and screenplays. “Open And Shut” was his first novel; “First Degree,” his second novel, was named a best book of 2003 by Publishers Weekly. He currently lives in Southern California with his wife and 35 dogs.

Q Your book covers are so cute. Do you have input?

David: I have nothing to do with it. They come up with it before anyone knows what the book is about. They do a great job. Readers have come to accept that many times the cover has nothing to do with the story. When the sixth book came out, Play Dead, it was the first time a dog was integral to the plot and that a dog was put on the cover. It sold twice as many copies as any previous books. From that time on I could write the Manhattan Telephone Directory and it would have a dog on the cover.

Q What is the role of the dogs in the story?

David: They serve as a lead into the plot. They have something to do with why the main character Andy takes the case. In this story I introduce the person of interest, Chris, through his volunteering to take care of a litter of puppies. Many people have told me they skim to the end of the book to make sure Tara, Andy’s Golden Retriever, is still well. She has been holding at seven for the last fifteen years.

Q Is it true you have rescued dogs as well?

David: My wife and I have a foundation where we have rescued about 4,000 dogs. If we rescued a dog old or ill, we would take them home as our pet. When we lived in LA we had as few as 25 and at most 42. The problem is that the shelters in LA county are horrible. We wanted to rescue a dog from this awful situation. I would tell them at night they are safe. I would talk to them, so they understood what I was saying and still do. Therefore, I put the quote in my book, “The human, in this case me, completely controls the dialogue. That’s not to say the dog can’t respond and convey his or her feelings and opinions.”

David: When I write a book it just goes where it goes. I get the ideas for the story three pages at a time. There is no “aha” moment. I have been told my stories are cohesive. Yet, I think of myself as somebody who gets by on dialogue and jokes. If I had a strength, it is in my banter and dialogue.  When I proofread it, I am pleasantly surprised by the plot. Once I write a scene it never comes out of the story, but this can cause roadblocks.

Q In the book you have incarcerated prisoners train dogs. Can you tell us about that?

David: A friend of mine set up a program in a prison where dogs are brought in, and the prisoners train them. It works great for dog and prisoner. It is sought after skill to do, and the dogs get human contact. It happens in a lot of places.

Q You mention sports in the book. Do you enjoy them?

David: I am a football and baseball lunatic. But if push comes to shove, I will choose football over baseball. I am a Yankee hater my whole life, so I am rooting for Houston. I also would never root for the Phillies. I am a Met fan, but the Padres beat them.

David: The next book is called Good Dog, Bad Cop, out in March. It is a K-Team spin-off series. The narrating voice is Corey Douglas He and his dog, Simon Garfunkel, retired. Now, he, his dog, Marcus, and Andy’s wife Laurie formed this private investigation team called the K-Team. The plot is a Cold Case concerning the death of Corey’s former police partner. Was it suicide or murder? This is what the K-Team is trying to find out.

Santa’s Little Yelpers by David Rosenfelt has all the holiday trimmings with a suspenseful plot, humorous dialogue, returning characters, including the K-Team, and cute dogs.

This plot has Andy contemplating retirement until a friend of his is accused of murder. Chris Myers was fostering a bunch of retriever puppies found at the Tara Foundation doorstep. Myers, a new employee at the Tara Foundation, did time for a crime he swears he didn’t commit. When Myers discovers a key witness against him lied on the stand, he goes to Andy to ask for representation in getting the conviction overturned. Myers thinks they can have this wrapped up by Christmas, no problem. But then, one of the witnesses who says he was lying and has agreed to come forward, has changed his mind. Chris is furious, goes to the witness’ house to convince him to testify, and finds him dead. Myers is arrested for the crime and Andy has agreed to be his defense attorney to clear him.

Anyone who enjoys a wise-cracking hero will enjoy this book. The main character, Andy, has many a snide remark, but also gets them back in his face. This is an excellent story with twists and turns.