Fourteen years ago, David and his wife started the Tara Foundation, named in honor of what he calls, “the greatest Golden Retriever the world has ever known.” They rescued almost 4,000 dogs, many of them Goldens, and found them loving homes. Their own home quickly became a sanctuary for those dogs that were too old or sickly to be wanted by others.

Q. What’s the role of the dogs in your books?

David: In the Andy Carpenter books they are just pets, although they do find bodies. They are not crucial to the books. In the Citizen K-9 books the dog has a role being a former police dog. One of the books, Play Dead, had a dog that was integral to the plot. For the first time they put a dog on the cover. It sold like twice as many copies because there was a Golden Retriever on the cover. With dogs on the cover there had to be dogs in the book. Usually, a dog gets Andy into the case.

Q. Is Citizen K-9 a spinoff of the Andy Carpenter series?

David: Yes. It is a third in a series. For some bizarre reason they are selling well so there will be more stories. Laurie, Andy’s wife, a retired police person, works with others to solve cold cases. I never have a eureka moment with ideas. The Andy Carpenter books are legal thrillers, and this book is a conventional thriller with some humor.

Q. The retired police dog is named Simon Garfunkel—are you a fan?

David: Yes, but that is not why I gave the dog that name. I used the name because I am into dog rescue benefits. I had a character name auctioned off. The person who won the auction wanted their dog’s name, Simon Garfunkel, to be used in the book. Since I liked the name, I used it.

Q. Do you want to tell us about the dog rescue?

David: Yes. Andy Carpenter started a dog rescue in the second book of that series. My wife and I started a dog rescue while living in California after our wonderful Golden Retriever, Tara, died. We started volunteering in the Los Angeles animal shelters, which are horrible. We did not want to see dogs put down, so we started our own foundation. We ended up rescuing 4,000 dogs. If one of the dogs was unplaceable they came home as our pet. We never had less than twenty-five dogs in our house. We are dog maniacs. Right now, we have thirteen because the rescue shelters in New England are terrific.

Q. Did you have any bad experiences?

David: Once, a year and a half collie mix came into the shelter with a broken leg. Nobody would fix it, and nobody would adopt her because of her leg. Someone working there had moved the dog from cage to cage so her management thought it a different dog. She brought the dog to a vet. We rescued that dog. She was the greatest dog we had for fourteen years.

Q. How would you describe Corey, a former police dog handler, now a PI and part of the Cold Case Investigative team?

David: He had an occasional temper. I was looking for different personality traits from Andy. He is courageous. He likes to be a rule follower. The means is far more important than the end to him.

Q. What about Andy from the Best in Snow book?

David: Andy is me. He thinks like I do, and we are in the same world. He has a warped sense of humor like me. He believes the end justifies the means. He is independent, sarcastic, sometimes obnoxiously badgering, no understanding of women. He became wealthy in book 1.

Q. How would you describe Laurie, his wife and now PI?

David: No nonsense, direct, doesn’t take any gruff. She does have a soft side. She is very protective of Andy. In book 4 she received this offer and was pondering leaving Andy. In book 6 and book 7 I brought her back and put them together.

Q. Where did Marcus, the enforcer, come from?

David: I probably ripped him off from Hawk of the Spencer books. Marcus evolved. He has a lot of idiosyncrasies. He has this whole other life that Andy does not know about. In this book Marcus speaks for the first time. He loves classical movies. No one knew he is married and has a child.

David: Holy Chow is the next book, coming out in July of this year. A woman rescued a dog from Andy, and she is murdered. The other book is titled Santa’s Little Yelpers, a Christmas book coming out in October. In this book Andy represents someone.

Citizen K-9 and Best in Snow by David Rosenfelt have dogs in the background. The former movie executive turned author knows how to create a plot that has a good mystery, some action, and likeable characters. There two series that usually come out every year. The “Andy Carpenter series” is more of a legal thriller, while the “Citizen K-9” series delves into Cold Cases and is a spin-off with many characters overlapping between series.

Citizen K-9 ‘s plot has a high school friend of the Cold Case Investigative team vanishing. They decide to investigate what happened and are not deterred by threatening incidents. The Paterson Police Department has created a cold case division, and they want to hire the private investigators known as the K Team to investigate the crimes. The team members include Corey Douglas and his K-9 partner, German shepherd Simon Garfunkel, recently retired from the force, Laurie Collins, wife of defense attorney Andy Carpenter, who used to be a cop as well, and Marcus, an enforcer type.
Their first cold case hits home for the K Team. A decade ago, at Laurie’s tenth high school reunion, two of their friends vanished. At the time Laurie had just left the force, and Corey was in a different department, so they had no choice but to watch from the sidelines. With no leads, the case went cold. But now they risk their lives to find out what really happened.

Best In Snow has defense attorney Andy Carpenter’s golden retriever, Tara, discovering a body. The murder victim is Mayor Alex Oliva, who had an infamous relationship with the newspaper. Last year a young reporter published an expose and was fired for libel. Now, the young reporter – and prime suspect– has Andy Carpenter agreeing to take the case. As the evidence piles up Andy must get to the truth to prove his client innocent.

Both these books have an entertaining cast of characters, lots of plot twists and turns, humor, wit, surprises, court room drama, and suspense. Readers will enjoy these reads 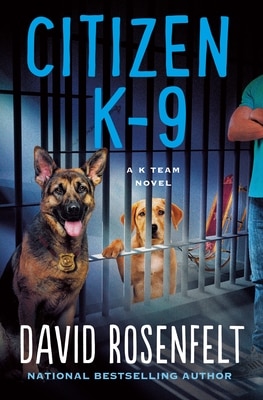 The Paterson Police Department has created a cold case division, and they want to hire the private investigators known as the K Team to look into the crimes. After all, Corey Douglas and his K-9 partner, German shepherd Simon Garfunkel, recently retired from the force. Plus, another K Team member, Laurie Collins, used to be a cop as well.

Their first cold case hits home for the K Team. A decade ago, at Laurie’s tenth high school reunion, two of their friends simply… vanished. At the time Laurie had just left the force, and Corey was in a different department, so they had no choice but to watch from the sidelines. With no leads, the case went cold.

As the team starts to delve deeper into the events leading up to that night—reopening old wounds along the way—the pieces start to come together. But someone wants to stop them from uncovering the truth behind the disappearance, by any means necessary.