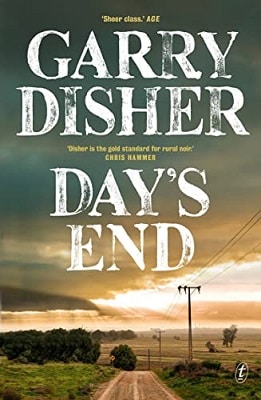 When it comes to my reading within the crime fiction genre, I have around ten to fifteen authors I follow and typically read any new novels by these authors as soon as I can and Garry Disher is on that list.

In reading his novels, he is one of those prolific authors that somehow always seems to produce works of fiction of reliable quality. Disher’s novels are written in such a gentle and smooth manner it seems as if he has cracked the formula when it comes to producing enjoyable books to read.

In Day’s End, Disher returns to police officer Paul “Hirsch” Hirschhausen for the fourth time and continues to make his journeys interesting to the reader.  With each installment of the series, Disher continues to add layers to each of his returning characters in ways that add to their depth. In the opening, Hirsch is accompanied by a mother named Janne Van Sant in the search for her missing son.  Van Sant’s son, until recently, had been working for a married couple on their expansive farm and has now vanished, purportedly after leaving his temporary employment.  After meeting with the employers, the information provided leads to more questions than answers.

The story takes a darker turn when a burning suitcase containing a grisly discovery is found cast alongside a rural road, where Hirsch quickly learns there is more to Janne Van Sant than meets the eye.

Before long, Hirsch becomes embroiled in a multi-pronged investigation reaching out into many areas that seem to touch on every aspect within his local jurisdiction.

While Day’s End is most easily referred to as “crime fiction” the contents are really more than that.  Disher weaves in the many parts of contemporary rural life that include things like COVID, racism, and the social inequalities of modern day life. Also, rather than describing this novel as a police procedural, it is really a broader encapsulation of rural life and societal changes that are all too common in today’s world.

Day’s End is not a runaway-locomotive thrill ride, nor do I think this series is meant to be. It is instead a meandering tale more interested in developing characters and telling a good story along with the intent on building a kinship with the reader and those in the novel.   The Hirsch series is also more like a literary police ride-along where, like in the classic 1970s Adam-12 police show, the reader travels with Paul Hirschhausen as he goes about his day trying to do the best he can in a rural environment, often times facing troubles more complex than the police can solve with easy solutions.