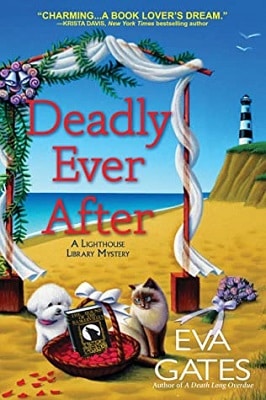 This is the eighth in the Lighthouse Library mystery series, but don’t let that stop you. Deadly Ever After is an excellent story, well designed, tightly plotted, and satisfying in every way. The setting—The Outer Banks of North Carolina—is beautiful as always, and the characters are like old friends with a few new ones (some of whom may be more like frenemies) who serve to give the entire book life and liveliness.

If you are someone who likes to follow along with the relationships as they develop, stop right now, go back and get the entire series and read them in order. I’ve read almost all of them, and can say that for the series lover, this is one worth reading from the start. That said, if you have already read some or all of the books in the series, or just want to read this one, that works too as this is a mystery that is completely contained within this book.

This story begins with a beach party to celebrate Lucy’s engagement to Connor. Her parents have come to celebrate, and the entire family is enjoying some time together with Lucy’s mom and Aunt mending some long ago damaged holes in their relationship. Pushing their way into this family time are Evangeline and Ricky. She’s the wife of Lucy’s dad’s law partner and he’s their son. Lucy and Ricky dated years ago when she lived in Boston and now Evangeline wants to convince Lucy to throw over Connor, her fiancé, and marry Ricky.

From the beginning, Evangeline comes across as the nightmare mother/mother-in-law we all know about and want to avoid. Whatever she wants for her son is paramount, and she is enough of a steamroller she seems to always get her way. She is so well drawn she almost appears fully clothed in her designer outfits looking down her nose at you. Of course, her ensemble is perfectly coordinated with wildly inappropriate shoes and accessories, not to mention her pedigree pooch. She wastes no time starting to push Ricky toward Lucy in her blatant attempt to get them back together. Although Lucy and Ricky acknowledged from the beginning they were never really in love, she ignores this as she sees their marriage as a way of continuing the legal dynasty created by their forefathers and continued into the present by their fathers.

Lucy’s mother is quick to explain this reconciliation attempt for what it is, an attempt to rescue Ricky’s father from some sort of financial mess he has created, and which now seems to be threatening the entire law firm. She informs both Lucy and her father that Evangeline believes Lucy has inherited money and her family needs it. Lucy and family know this isn’t true as she will not inherit anything until her parents’ death, and even then it will be split three ways between her and her mother. It comes as a shock to Evangeline when Lucy’s mother indicates that indeed, Lucy is not in possession of a large inheritance.

What no one is talking about is how Ricky’s father, Lucy’s father’s law partner, lost all their money which created this problem in the first place. There are questions regarding who else might be involved. Has Ricky’s father gotten into some sketchy loans or business dealings with unsavory characters? Why does he come to the Outer Banks from time to time on his own?

Matters get more complicated and serious at a dinner supposedly arranged to celebrate Lucy’s engagement. Arguments and recriminations abound and people scatter from the dinner. Not long after, a scream is heard and everyone rushes to the kitchen door where a body has been found. As more orderly conduct returns, Lucy looks down at the body and realize it’s that of Ricky’s father.

He was supposed to be in Boston, and no one knows why he would drive the twelve hours to the Outer Banks, especially without telling anyone. As the investigation begins, Lucy learns Ricky’s father has made numerous trips alone to the Outer Banks, supposedly to go fishing with clients. As more questions are asked, the reasons for his coming to the area become less clear. Lucy also learns Evangeline has been coming to the area alone over the years, again without telling anyone. It would appear the Outer Banks is significantly involved in this murder, but trying to find out why or how is becoming more of a puzzle with each passing day.

True to form, Lucy gets drawn into trying to solve the mystery while at the same time trying to turn all the information she receives over to the police. She is determined not to get involved this time; but, of course, circumstances have a way of pulling her in whether or not she wants it. There is a delightful mix of investigation on Lucy’s part, a little suspense regarding threats she receives, and the continuing story of her relationship with Connor. Overall, it is a pleasant vacation of a read, with just enough sand and surf along with a tightly plotted mystery and investigation to please almost any cozy mystery lover.

My thanks to Crooked Lane Books and NetGalley for providing me with an advance copy of this book for review.