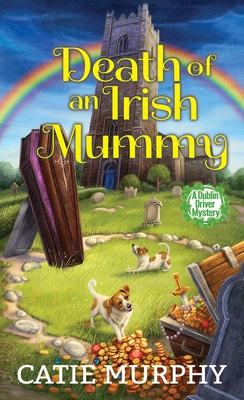 Death of an Irish Mummy

Settle into a comfortable reading space, open up Death of an Irish Mummy and enjoy a quick mental trip to Ireland. Catie Murphy’s description of the Irish countryside, along with some of the residents of the area, gives you the feeling of being there without having to get on an airplane.

There is just enough dialogue written in idioms to give you the feeling you are listening to some Irish born speakers. Bonus points for those readers who occasionally read dialogue in accents. If you do that here, it will heighten the experience of vicariously traveling to the country.

The characters are well developed, and so well drawn you can almost see them. There are enough unique types, fully developed, to create a complete picture of the inhabitants of the story. There’s a version of “The Ugly American” who can’t seem to get the names of places quite right and who only came because she wants the church to exhume the skeleton of a long-buried earl or one of his heirs. This is Cherise Williams, who wants to extract some DNA as a way of verifying her claim of ancestry. Cherise is being driven around by Megan Malone, an expat who has lived in Ireland for three years now and drives for Leprechaun Limousines. It’s work Megan loves, and  only slightly marred by what seems to be the regular occurrence of her finding dead bodies.

While these two open the story, encountering a wonderful Irish tour guide and a wily Irish priest, they are soon joined by several others. Cherise, who is the murder victim in the story, is quickly replaced by Raquel, the daughter who was supposed to accompany her on this trip. When Cherise is murdered, Raquel calls her two sisters, Sondra and Jessie, who fly to Ireland overnight.

Megan is the protagonist and narrator of the Dublin Driver Mysteries and provides an excellent window into what is happening in the story. She is often asked to drive for Americans because she speaks their peculiar brand of English, which is why she is driving Cherise Williams and her daughter. Megan relates the opening tour of the church’s tombs and Cherise’s rather unorthodox request with a mixture of discomfort and humor that set the tone for the book. She manages to relate Cherise’s genuine expectation that the church can just open a crypt at her request so she can have just one bone. After all, no one would miss a finger, would they?

Before the priest has to give a definitive answer it’s time for  Raquel’s plane to land and Cherise decides to send Megan while she goes back to the hotel for a rest. From the moment Megan opens her mouth to welcome Raquel to Ireland, Raquel identifies her as a fellow American. When Megan confirms this and even explains she is also from Texas, like the Williams, Raquel establishes that they are friends, and thus Megan’s status with the Williams is solidified. The friendship becomes more of a necessity when Megan helps Raquel up to her room and, upon opening the door, they discover Cherise’s body.

While the above happens at a quick pace, things move even faster from that point. Raquel’s two sisters, Sondra and Jessie arrive and the story really takes off. Sondra is the very put together, older sister and Jessie is the youngest, who leans toward a hipper, freer lifestyle. All three sisters are highly entertaining, and the arguments and discussions they get into feel very true to families everywhere.

The first call Megan makes after discovering the body is to her friend Paul Bourke, an Irish Guarda. He pleads with Megan not to get involved in this investigation if for no other reason than his boss is growing weary of seeing Megan’s name attached to dead bodies again and again. Of course that doesn’t happen, and Paul resigns himself to getting information from Megan that he might not get otherwise.

Other series regulars make appearances to a greater or lesser degree. Megan’s boss, Orla, is a primary focus as she first fires and evicts Megan, then rehires her temporarily, then is forced to ask for Megan’s help to solve the murder. It seems there is a possibility Orla may become a suspect because she is involved with some members of the IRA. As it is explained to Megan, Cherise’s claim is to a long dead British earl who received his land when Britain exerted their authority over the country. If that wasn’t enough to cause possible negative feelings among some who were still involved in fighting for home rule, he was also responsible for the impoverishment of many of the local citizens who had worked the land prior to his overtaking it. To Megan’s surprise there is a contingent of Irish who would like nothing more than to remove all the English from their land and return it to the Irish families they believe are the rightful owners and heirs.

Combined with the investigation of who murdered their mother, the sisters are tasked with what to do with their mother’s body. It’s expensive to have a body flown across the ocean and will likely take longer than they have. These two factors have Megan driving the three sisters to the now crumbling manor house owned by the earl and the surrounding town. While there they encounter a number of local residents, including the last surviving relative of the earl, a woman who spends time searching the grounds of the manor house for buried treasure, and a young man Jessie met on the internet while doing ancestry research. His appearance is resented by Jessie’s boyfriend who appears at their hotel, explaining he followed Jessie to Ireland to see if he could help.

The identity of the murderer wasn’t difficult to guess, but the book was no less enjoyable for that reason. This is the third book in the series by Catie Murphy and is just as enjoyable as the first two.

My thanks to Kensington Books and NetGalley for providing me with an advance copy for this review. The opinions stated here are entirely my own.