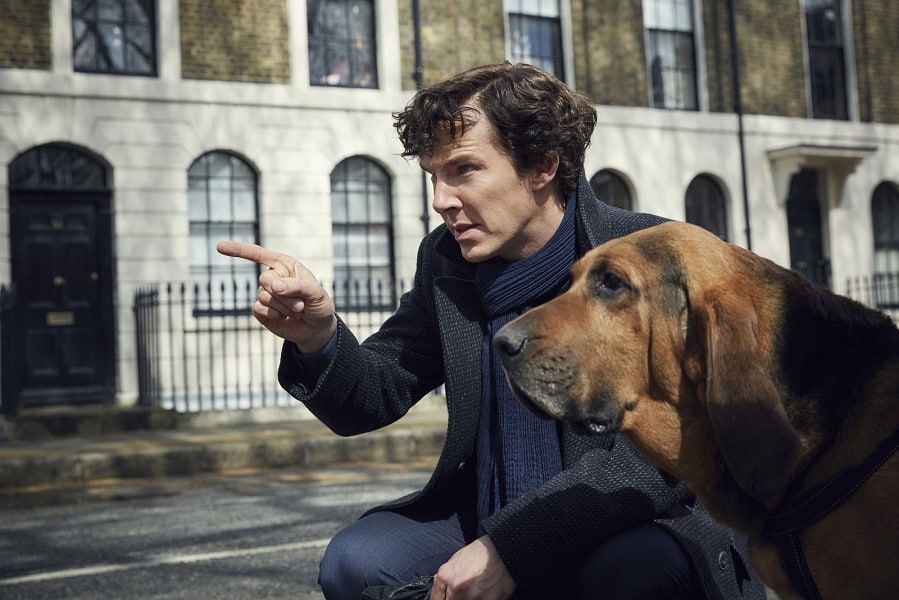 The characteristics of dog breeds add their own specific flavor to a mystery or thriller. From intelligence to drive to physical stamina, these dogs have rightfully earned their place in crime fiction as equal working partners with their handlers, and sometimes as the key that brings the case to a close for an investigator. 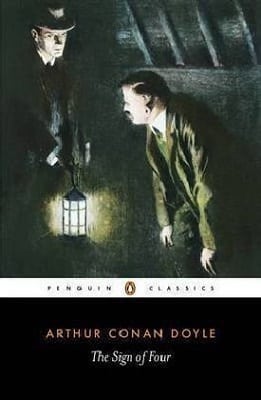 A lurcher is a hybrid dog resulting from the deliberate cross-breeding of a sighthound such as a greyhound with a terrier, herding breed, or large scenthound. The intent is to add tenacity, intelligence or scenting ability to a hunting dog prized for stealth and silence. Because they are mixed breeds, lurchers vary widely in size and appearance.

The Sign of the Four by Sir Arthur Conan Doyle: Published in 1890, this was one of the earliest books to enlist a scent dog to advance a fictitious homicide case. The dog in question, Toby, is described as “an ugly, long-haired, lop-eared creature, half spaniel and half lurcher, brown and white in color with a very clumsy, waddling gait” and a love of sugar cubes. Sherlock Holmes is in search of two men—one with a peg leg, and his diminutive accomplice—responsible for the death of Bartholomew Sholto. When traces of creosote are found on a window sill at the scene of a murder, Holmes uses Toby to track the killers after offering the dog the scent of creosote from a sample dabbed onto his handkerchief. Toby enthusiastically follows the trail to an intersection where he becomes briefly conflicted before continuing on to a barrel of creosote. Holmes realizes the dog was confused earlier by two separate scent trails and returns with him to the intersection. Toby then leads Holmes and Watson to a wharf where it becomes clear the suspects have escaped by steam launch. 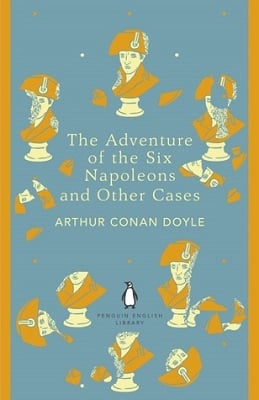 The bloodhound breed originated in medieval France, developed to trail deer and wild boar. Bloodhounds belongs to an old grouping of dogs that hunt together by scent, known as Sagaces, which shares the same Latin root as the word “sagacious,” referring to the qualities of keen discernment and sound judgment. The breed is notoriously stubborn and can be mistakenly perceived as lazy as a result, but a strong and skilled handler can bring out the best in the dog.

Sherlock, Series Four, The Six Thatchers, loosely based on Doyle’s The Six Napoleons: After finding blood on a fragment of a smashed plaster bust of Margaret Thatcher, modern day Holmes borrows Toby the bloodhound from a hacker who owes him a favor. When they first give the dog the scent, Sherlock, John, and Mary are initially stymied by Toby, who clearly has no intention of moving (Fun fact: This was actually an accident of filming. The dog they used as Toby simply wouldn’t move, and the actors ad-libbed around him so well the scene was incorporated into the final cut). But once the chase is on, Toby follows the scent trail into Boroughs Market until he loses the trail in the larger, blood-soaked scent cloud from a butcher shop where huge cuts of meat are constantly being carried out of the market. The suspect knew he was wounded, suspected Holmes would employ a scent dog, and ensured that his specific trail would be lost in numerous other blood trails. 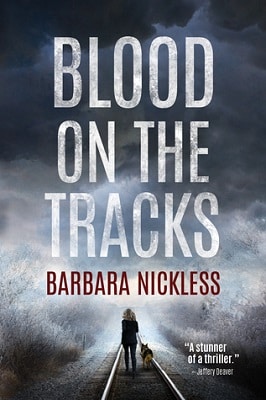 The Belgian Malinois breed was originally developed to protect and herd. Malinois are intelligent and easy to train, but exhibit substantial prey drive, abundant energy, and require a lot of exercise. Individual dogs vary in temperament from friendly to aloof. Although well-socialized Malinois are good with children, they may nip at them and try to herd them while actively playing.

Sydney Rose Parnell series by Barbara Nickless: Clyde, a Belgian Malinois, lost his first handler in Iraq after he was murdered by insurgents. Sydney, a Marine mortuary affairs attendant, was caring for Clyde while his handler was out on the last mission from which he never returned.  When she returned stateside, Sydney adopted Clyde while she tried to rebuild her life by returning to school, dealing with PTSD, and becoming a railroad cop. Together, they patrol train and railyards, searching for those who hop trains to avoid law enforcement, transport drugs, or simply change locations free-of-charge. A highly skilled scent dog, Clyde is able to trail unknown suspects without a recognized scent through multiple cars to a point of egress from a moving train. 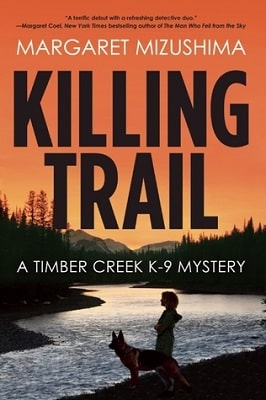 German shepherds were bred in the late 1800s to herd sheep and protect flocks from predators. They are also known as an “Alsatian Wolf Dog”. Intelligent and highly trainable, they are exceptional guard dogs, and also excel in police detection, patrol, apprehension, guide and assistance work, and search-and-rescue.

Timber Creek K-9 Mysteries by Margaret Mizushima: Starring Sheriff’s Deputy Maddie Cobb and her German shepherd, Robo, the six-book series (the seventh book comes out in September 2021) is set in and around Timber Creek, a small, fictional Colorado mountain community. Robo is brought into the Sheriff’s department because of a local drug problem and, like many small jurisdictions, as the sole K-9, Robo is not only a narcotics detection dog, but is cross-trained in patrol, tracking, apprehension, and search-and-rescue. Together, Maddie and Robo are sent out into the treacherous high-country in search of evidence or to track fugitives, frequently battling extreme conditions such as heavy snow or torrential rains. The strong and intuitive bond between handler and dog allows for out-of-the-box thinking and for Maddie to be able to use Robo in areas in which he has not been directly trained. 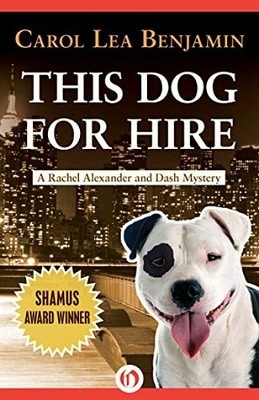 The American Pit Bull Terrier is one of the so-called bully breeds often labeled as a pit bull. In fact, “pit bull” isn’t a breed at all, but is a term generally used to refer to a dog of stocky build and short coat, having blocky head. At least sixteen breeds as diverse as the boxer, bullmastiff, Boston terrier, French bulldog, and the American bully are classified as bully breeds. Originally bred to bait bulls, they were later used as herding, hunting, or guard dogs.

Rachel Alexander and Dash Mysteries by Carol Lea Benjamin: Rachel Alexander saved a life when she “rescued” (in other words, stole) a pit bull puppy who was being trained by a group of ruffians as a fighting dog. Dash (named for Dashiell Hammett), now grown, is a therapy dog and an integral part of her life as a private investigator in New York City. In this nine-book series published between 1997 and 2006, Rachel takes on different animal-related cases, with Dash actively at her side for each one. Dash does everything from giving Rachel cover for undercover work in therapy settings, finding clues, helping run security, and protecting his owner when Rachel gets into sticky situations. An intuitive animal, Dash often reads people better than Rachel. Benjamin, an experienced dog trainer herself, highlights this often-maligned dog as Dash repeatedly demonstrates his solid instincts, as well as his loyalty and love for his handler (and his gentleness, as Dash loves to pull tissues from the box to bring to Rachel when she needs them).

Be it a breed less widely known, such as a lurcher, or a perennial favorite, like a German shepherd, dogs have a special role in crime storytelling. Partner, investigator, muse, protector, or companion, these dogs are an essential link in closing the case and catching the suspect.

Jen: A scientist specializing in infectious diseases, Jen J. Danna works as part of a cutting-edge research group and is currently involved in two national COVID trials. She is the author of the NYPD Negotiators thriller series; the second book in the series, SHOT CALLER, releases in September 2021. With Ann Vanderlaan, she writes both the FBI K-9 series (as Sara Driscoll) and the Abbott and Lowell Forensic Mysteries. Book five of the FBK K-9s, LEAVE NO TRACE, where Meg Jennings and her search-and-rescue dog, Hawk, search the Blue Ridge Mountains in pursuit of a murderous bowhunter, released in January 2021.

Ann: A retired scientist and engineer who specialized in software development, database management, and accident reconstruction in the petrochemical and oil field service industries after teaching stints at a veterinary school and a medical school. She has co-authored two series with Jen Danna— the Abbott and Lowell Forensic Mysteries and the FBI K-9 series (as Sara Driscoll). These days Ann spends her time with her dogs—especially Kane, a certified therapy dog and titled nosework dog—exploring their new home in the Blue Ridge Mountains. 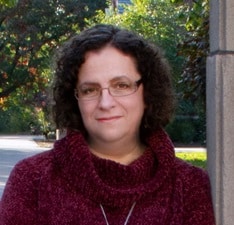 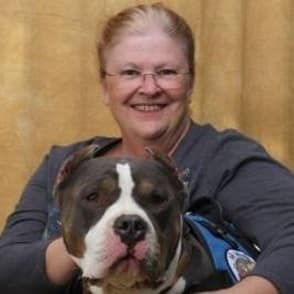