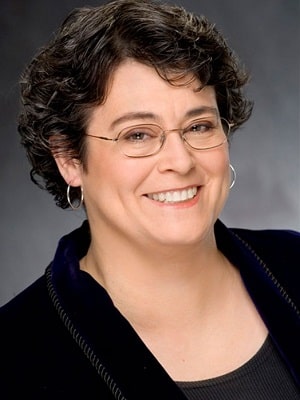 Donna Andrews has won the Agatha, Anthony, and Barry Awards, an RT Book Reviews Award for best first novel, and four Lefty and two Toby Bromberg Awards for funniest mystery. She is a member of the Mystery Writers of America, Sisters in Crime, and Novelists, Inc. Andrews lives in Reston, Virginia. She has written nearly 30 books in the Meg Langslow mystery series.

Q Murder Most Fowl is the 29th book in the long-running Meg Langslow series. What was the inspiration for the latest?

Donna: In the final chapter of The Falcon Always Wings Twice (August 2020)—the chapter in which I wrap up all the loose ends from all the subplots in the book—I resolved one issue by having Michael, Meg’s drama professor husband, recruited to direct a production of Hamlet. And it was not a big point—almost a throwaway line—but the more I thought of it, the more I realized that it would be fun to have him directing a Shakespearean play. I settled on Macbeth rather than Hamlet, because I thought I could have more fun with it—along with the cast and crew either staying in Meg and Michael’s house or camping in their yard I wanted to saddle Meg with a crew of clueless reenactors, who have set up their notion of a medieval Scottish military camp in the woods behind the house. And the possibility that a group of people are out in the same woods actually trying to cast evil spells. Throw in a little interdepartmental academic warfare and the world’s most intrusive documentary filmmaker, and I decided I probably had the right mix of ingredients for a plot that mixed humor and homicide. And for an added bit of fun, I modeled a few aspects of Michael’s Macbeth on one I worked on—as part of the costume crew—during my own college drama department days.

Q How do you keep the story fresh for readers?

Donna: I think one thing that helps keep the story fresh for readers is something that keeps writing it fresh for me—I’m always looking for new things Meg can be doing or new places for her to go. So I took her on a cruise in Terns of Endearment . . . invented a Halloween festival for Caerphilly in Lord of the Wings . . . inspired her grandfather to hold an ornithological meeting in Owl Be Home for Christmas . . . involved her mother in a decorator showhouse in The Nightingale Before Christmas . . . had her grandmother run a Renaissance Festival in The Falcon Always Wings Twice. I take the old “write what you know” adage and add “or what you could have fun learning about.” I figure if I can have fun researching and writing about something, I can probably make it fresh and fun for the readers.

Q Your bird puns are legendary (We’ll Always Have Parrots, Die Like an Eagle, No Nest for the Wicked, and dozens more). How do you come up with these? Do you sometimes write the pun before the book?

Donna: Sometimes I come up with the pun and invent a book to go with it—Duck the Halls was an example of that. Sometimes I come up with a plot and arrive at the perfect pun—Gone Gull was one of those. Sometimes I have to try a couple of times before my publisher okays a title—the 20th book in the series started out as Eagle Rights and became Eagle Opportunity and Eagle Under the Law before ending up as Die Like an Eagle. I also sometimes use suggestions from friends—Owl Be Home for Christmas, for example, was suggested by Dash, the son of my writer friends Tara Laskowski and Art Taylor.

Q What do you read when you’re not researching your next book?

Donna: When I’m not writing, I like to catch up with friends’ books—and my friends include a lot of really awesome mystery writers. But since I’ve been doing two books a year for the last few years, I don’t have as much time as I’d like to do that. When I’m writing, I mostly read nonfiction—a lot of history and biography along books on science, like those by Oliver Sacks or Leonard Mlodinow. And I do a lot of listening to audiobooks—and, as research for the upcoming book, true crime podcasts.

Donna: Currently I’m working on a book that we’ve just titled Round Up the Usual Peacocks. I’m harking back to peacocks again because in this book Meg’s brother, Rob, is finally getting married to Delaney, the woman he’s been engaged to for the last several books—and they need to have peacocks for the reception. But luckily for Rob and Delaney, their mothers are in charge of organizing the wedding, because Meg has another project on her hands. Her tech-savvy nephew, Kevin, has joined forces with a friend to produce a true crime podcast . . . and the partner-in-podcasting very narrowly escaped being the victim of a deliberate hit and run. Kevin’s afraid that one of the cold cases they reported on isn’t as cold as they thought—maybe someone who has something to hide is trying to shut them up. And Meg agrees to look into the cold cases before something else happens to Kevin and his friend—or to the many other friends and relatives who are already arriving in town for the wedding. 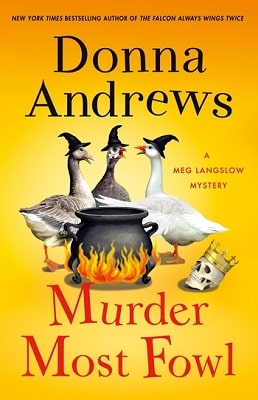 Meg Langslow’s in for a busy summer. Her husband is directing a production of Macbeth, and most of the cast and crew are occupying spare bedrooms in their house. She also has to keep an eye on Camp Birnam, where a group of medieval reenactors are commemorating the real-life Macbeth by setting up what they fondly believe is an authentic medieval Scottish military camp.

And then there’s Damien Goodwin, a filmmaker who has been hanging around, trying to document the production. When Goodwin hosts a showing of some of the footage he’s taken, he manages to embarrass or offend just about everyone. The next morning Meg isn’t exactly surprised to find that someone has murdered him.

But who? Some people’s motives were obvious from the footage: the couple whose affair was revealed . . . the bombastic leader of the reenactors, who could be facing years in prison if the evidence from the video helps convict him of sheep stealing . . . the actress who’s desperately trying to downplay a health issue that could cost her the role of her life. Other motives are only hinted at–did the filmmaker have other footage that would reveal why one of the actors is behaving so furtively?

Unfortunately, whoever murdered Goodwin also destroyed all the electronic devices on which his video was stored. So Caerphilly’s chief of police–and Meg–must rediscover the same secrets the filmmaker did if they want to catch a killer.