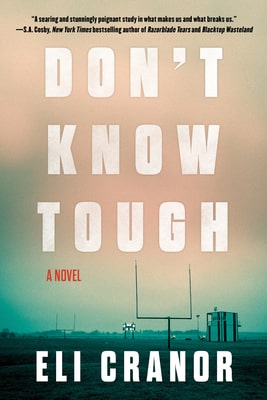 “Standing on the rise, there’s another woman, a ghostly figure, barely visible beneath the towering lights of Friday night. Her shape is familiar, though the way she stands bent against the backdrop of the small, southern town. Trent can feel her pull, their lives woven together now like the thick white laces on a football.”  –Trent Powers Don’t Know Tough.

Don’t Know Tough is intense. It is a dark Friday Night Lights written with a gruesome murder mystery thrown in. It is compelling, unputdownable and full of the twists and turns you only see in the most seasoned writers. I have a hard time accepting this is Eli Cranor’s first novel. He writes about the complex but also magical world of football in small town Arkansas. But don’t be fooled. This book is dark. There is racism, murder, teen pregnancy, bullying and horrific abuse. The characters are multi-faceted but tragic. I am not a huge fan of Noir books, but I couldn’t put this down once I picked it up.

Billy Lowe is one tough football player. Simple-minded and angry, he cannot control his temper. He has been raised by a single mom, Tina, never really knowing his dad. His mother’s longtime boyfriend, Trent, is abusive. Cranor brings you right into Lowe’s reality in only a few sentences. Billy’s story will grab you and not let go. In the same vein as the movie “The Blind Side”, Billy’s life is so unstable that the new coach takes him in. Trent Powers has moved his family from California to small town Arkansas, to be the coach of the town’s high school football team, the Denton Pirates. He has been fired from his previous coaching job, under his Father-in-law’s guidance. Marley, his wife, is disappointed in Trent and unhappy in Arkansas. But he is determined to show Marley and his Father-in-law that he can make this work and make it to the play-offs. He knows he can not do this without Billy Lowe. When Billy, from the wrong side of the tracks, beats up rich kid Austin Murphy at practice, the principal recommends that they pull Billy out, putting Trent in a bind on whether to play or bench Billy. Trent thinks he has the answer to both his and Billy’s problems by taking Billy into his home. But when Trent and the chief of police find a body, everything explodes in the small town of Denton, Arkansas.

As one reader so eloquently put it, there are two people running; Billy on the football field running away from his family, his violent stepfather, his negligent addict mother, and from the history his older brother has left for him. Trent Powers, running from a wife who can’t be happy with him unless he is doing what her father says. In reading Cranor’s acknowledgements at the end, agents rejected him over 200 times in trying to publish this book. He has played football at every level, including coach and his research and experience contribute a lot to how readable it is. You will feel you are sitting at the stands on a Friday night under the lights, watching a game and not having any idea how it will end. One thing is for sure, it will definitely surprise you. This author is one to watch!