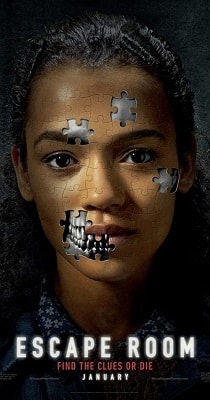 Escape Room was a 2019 Sony distributed psychological horror film that has a sequel expected to come in 2021. The film is similar to the Saw franchise in the method that games are played with winners and losers, where the losers end up deceased. Critics have given Escape Room mixed reviews, with praise for the atmosphere and cast, but negatives around the familiar plot and inability to take full advantage of the film’s unique premise.

Development began in 2017 under a different name, with filming beginning in late December 2017 in South Africa. It was released in January 2019 after previously delays.

Overall, a very good film, and enjoyable for viewers without being scary. I was concerned initially that Escape Room would be too similar to Saw and be more gory than how it turned out. I noticed that the film has been getting more discussion lately which I think is due a recent release on Netflix. which will be great for the film ahead of the sequel this year.

The cast were a great mix of actors, and all performed exceptionally in creating an atmosphere of fun, suspense, and a desire to find the truth / reason behind the games. But since we already know what the critics thought of the film as mentioned above, what do you think I enjoyed about the film?

Escape Room follows a group of 6 people who find themselves involved in a series of dangerous escape rooms in an attempt to win $10,000 if they successfully solve all the puzzles. Each of them have different backstories, revealed over the course of the film. And, of course, there is more than meets the eye concerning what drove each of them to the game and their motivations in life.

The format involved in each room follows the normal escape rooms that exist in real life which you can participate in. (And are great fun, so would have to recommend after the pandemic to check one out!). As the film uses each room as a means of progressing the story, they end up getting involved to the point that they are another character in the background. Initially it seems as though everyone involved with the game got there due to being given a cube from someone who they trusted and found themselves competing together in an attempt just to survive rather than try and win the $10,000.

We have a mix of different characters: An army vet, a quiet college student, a grocer, investment manager, and an escape room master all included among the main group. This gives the film humor placed throughout, with quick quips and comments from one character to another. Getting to spend time with Deborah Ann Woll who I had only seen in Daredevil was a treat as she is an outstanding actress. But this film was stolen in terms of spotlight for me by Jay Ellis. That man was given the best quips of the film, h most of them directed towards the characters of Ben and Danny. However, it was definitely not as funny as they expected it to be which is one of the reasons that I would be inclined to think better of the film than I originally expected. I hope they are able to have as much fun in the sequel.

The most outstanding thing, without a doubt, are the visuals. Each room is so unique and the development that had to go into creating the scenes we get in each room are something to behold. We have the first room they find themselves situated in becoming an oven and going up in flames, before room two leading them into an ice infested land. (All of the rooms make sense over time after more of their backstory is revealed). The snow and ice room was great visually, the snowcapped mountains, the ice fishing hole, and the slow takeover of hypothermia. We are all aware of how hypothermia affects the body within it killing us with the cold and our body shutting down, but we got to see lips turning blue, icicles forming on faces and the body shutting down slowly over time. This room coming more or less directly after the fireball of death that rained down over the boardroom they originally sat in.

But my favorite room without a doubt had to be the room with the falling floor based in a pub. The upside aspect of the room was new and very different for me to look at, the camera work involved, the danger that the characters had at that moment in time, and overall the deception involved on the part of the game makers when developing out that room gave the characters a different perception. The climbing that the characters had to do in order to avoid the floor that was dropping to the following of musical chairs, caused the audience to be able to become aware of when everything was going to happen and seeing the group learn how the game makers have devised their plans. An enjoyable room based off of visuals has to go the one involving a hatch which seemed to be laced with LSD. Getting to see the camera show the effect of the drug and how they are required to find an antidote to the drug, based on the room they were in gave an interesting effect to the viewer. (But there are a lot of flashing lights in this room, so epilepsy warning for any who need it).

Escape Room ends with a couple of them managing to get out of the escape room itself and survive against the odds with their survival not being something that was expected to happen. As they have survived the games, but unable to let it go, they end up discovering more information about the group who set up the games and began toying with their lives. Due to this, a trip is booked to go to the potential headquarters of the corporation, where we come to realize that they know the pair are coming. With a new game already in development with a success probability of 4% for them. As we have a shadowy figure at the top who we get in contact with demonstrates the depth that this film went to in development. I am thinking now that we could have a trilogy of this series and I am hoping the second is just as strong as the original!