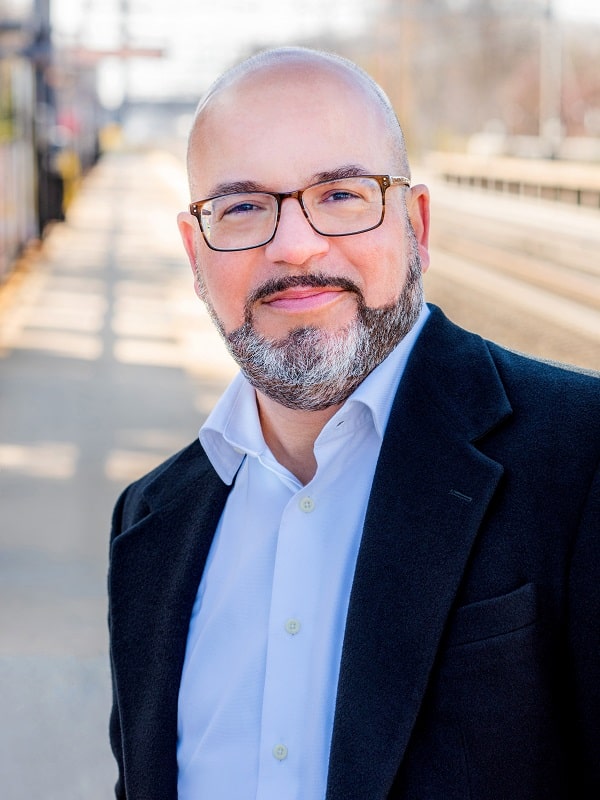 Fabian Nicieza is an American comic book writer and editor who is best known for his work on Marvel titles such as X-Men, X-Force, New Warriors, Cable and Deadpool, and Thunderbolts, for all of which he helped create numerous characters.

His first novel, Suburban Dicks, a sarcastic murder mystery, will be released in June 2021 from Putnam Books.

Q. Your debut novel, Suburban Dicks is an amateur sleuth mystery about a disgraced journalist and a homemaker who should have been an FBI profiler teaming up to solve a crime. What inspired the story?

Fabian: In the early 90s, I lived in a new construction development that had a gun club on the other side of the pond. They were kind enough to occasionally lob bullets our way and the police and town government of that time failed to responsibly limit their outdoor shooting. So, powerless in real life, I sought revenge as a writer: what if we learned that members of the gun club did something wrong years ago and it led to their comeuppance today?

The main characters were a mish-mash of friends and family, even a little bit of me. And luckily, because it took me 20+ years to give the book an honest shot, the story evolved in several ways from that initial impetus, helping, I think, to improve the final manuscript.

Q. What inspired you to write a novel after a lauded career as a comic book writer?

Fabian: The most noble of human emotions: anger and jealousy! Towards the end of 2017, I was angry at myself for consistently lacking the confidence to follow through on my prose work and I was jealous that several of my peers had sold novels.

I had twice tried writing Suburban Dicks, but never got very far along. On my final attempt, time and experience factored in, and I found a way to simplify the process in my mind. I found a cadence in the narrative that I hated less than I usually hated my own work. That confused me, so I had several people read a few of the initial chapters. The response was very positive, which confused me even more. But by that point I was committed to seeing the work through to the end. Which, clearly, I’m glad I did!

Q. You’re universally famous as the co-creator of the character, Deadpool. How does some of the humor of that character come into Suburban Dicks? Where do you draw your comedic inspiration?

I don’t know, where does the humor come from? Isn’t the existence of something like “Growing Pains” enough of a reason for self-defense sarcasm?

Deadpool’s humor originally came from the part of my brain that can’t abide authority, structure, or societal hypocrisy—and that irreverence became blended with the trickster—exhibited by high-end literary characters like Bugs Bunny. For the character, his humor was meant to distract and confuse opponents while also masking his own pain and tragedy. For readers, the humor is cathartic, since the character says the things society expects us to catch with the filter between our mind and our mouth.

I conceived of Suburban Dicks in 1994/95, just a couple of years after Deadpool was created, so what you might see as the humor or sarcasm of the character bleeding into the work, I just see as the normal process of my brain codifying the irrational insanity of our reality on a regular basis, as I have tried to do for thirty five years as a writer.

Q. Would you say Suburban Dicks is a comedy masquerading as a mystery, or a mystery with humorous elements?

Fabian: That’s a great question because I don’t know if I’m versed enough in the mystery genre to consider myself a mystery writer, and I think much of the subject matter is too tragic to call it a comedy!

I dubbed it as “a sarcastic suburban mystery” because I thought it was a cute hook for summarizing it, but having finished the second book in the series now, to me the mystery and comedy are almost equally weighted blankets I’m using to make the reader feel cozy and safe against the more uncomfortable aspects of the stories.

Suburban Dicks is really about white fear of change and white flight from that change, while the second book is about the numbing, slow-drip water torture of suburban marriages.

See why it’s safer to just call it “a sarcastic suburban mystery” – ?

Q. Is this your first mystery? What was your experience writing in a new genre?

So, to me, from a structural standpoint, the process of having characters identify a problem in a comic book and then solve it, isn’t all that different than a mystery novel.

Having finished the second Suburban Dicks manuscript, which is a bit of a different beast than the first one, I realized my thought process flows less towards “who done it?” and much more towards “why done it?”

I like to use the mystery structure to explore aspects of characters and use that to reflect on aspects of society, so I guess moving forward, that will sort of be my “mark.” Unless the books are universally despised. In which case, I guess universal derision will be my mark.

Q. What do you enjoy reading? Anything good lately?

Fabian: I actually didn’t read much fiction for many years, as I preferred to read non-fiction. Looking back, I think that was just a defense mechanism to avoid the stinging insecurity that I had lacked the courage to write a book! But oddly, once I finished and sold Suburban Dicks, I found myself reading more fiction again!

I’ve been on a Michael Connelly kick lately and have been reading a lot of the titles in his Bosch Universe. I’m also several letters into Sue Grafton’s incredibly impressive alphabet series and on the recommendation of my wife, I am reading Louise Penny’s first book.

And I usually have a comic book trade paperback on my Hoopla app and a Marvel Masterworks volume of older Marvel Comic material on my nightstand.

Fabian: Just finished the rewrites on the still-untitled second Suburban Dicks book off of my editor Mark Tavani’s excellent notes. “Cut and add.” Okay, sure, Mark, thanks a lot! (he said kiddingly)

Let me see… the open documents on my laptop dock include script tweaks for a Marvel Comics project that hasn’t been announced yet; a plot for the second issue of an unannounced creator-owned comic book project; plots for Outrage, which is my digital comic on the Webtoon app; a franchise story world bible for a classic toy property that is looking to reconceive itself; about sixty pages into a book that I may or may not see through to its finish; and the initial chapter outline cards and chronology charts for what will (hopefully) be the third Suburban Dicks book.

I just looked at that list and realized I have to get back to work. Thanks!

Andie Stern thought she’d solved her final homicide. Once a budding FBI profiler, she gave up her career to raise her four (soon to be five) children in West Windsor, New Jersey. But one day, between soccer games, recitals, and trips to the local pool, a very-pregnant Andie pulls into a gas station—and stumbles across a murder scene. An attendant has been killed, and the bumbling local cops are in way over their heads. Suddenly, Andie is obsessed with the case, and back on the trail of a killer, this time with kids in tow.

She soon crosses paths with disgraced local journalist Kenneth Lee, who also has everything to prove in solving the case. A string of unusual occurrences—and eventually, body parts—surface around town, and Andie and Kenneth uncover simmering racial tensions and a decades-old conspiracy. Hilarious, insightful, and a killer whodunit, Suburban Dicks is the one-of-a-kind mystery that readers will not be able to stop talking about.