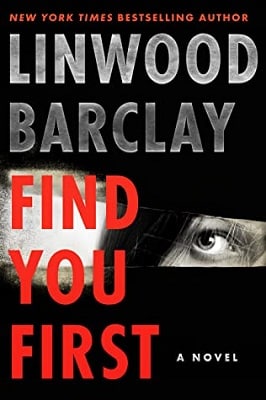 I have been a fan of Linwood Barclay and his thrillers for years, but somehow fell off the bandwagon at some point. After jumping back on with last year’s Elevator Pitch, I was thrilled to read his latest, Find You First.

Miles Cookson is, to put it mildly, a millionaire. He made his money in the world of tech and is extremely successful. He has everything he could ever want, and has just recently found out he has something he never wanted. Miles has been diagnosed with Huntington’s Disease, a terminal illness that will eventually eat away at his motor skills. On top of that, there is a fifty percent chance that the gene can be passed onto other members of the family.

Not many people know this, but before Miles was rich, he would supplement his income as a sperm donor. Through highly unethical resources, he finds out that he has nine children out in the world. Not only does he want to find them to have them get their DNA tested to see if they have the Huntington’s gene, but he also wants to start dividing his fortune out to them.

Chloe Swanson is an aspiring documentary filmmaker who is looking into who her biological father is. Through a DNA test, she finds out she has a half-brother out there in the world. What she doesn’t yet know is that Miles is her biological father. They eventually meet up, but the excitement of finding each other is short lived. It seems as though some people don’t want Miles to connect to his children, and are doing anything necessary to eliminate the rest of them.

But, for what purpose?

You will have to read it to find out. There is a LOT going on in this suspenseful tale, but the less said is better. I was hooked from the start, and surprised that the book is told through multiple POVs and scenarios. Eventually, all of the stories connect to the main one. Some of them, I suspected. Others caught me by surprise.

The tension (and body count) rises as the story breezes its way to an ultimately satisfying epilogue. There were moments where I had to suspend disbelief at the motives and actions of certain characters, but hey…it’s fiction.

The bottom line: Find You First is an enjoyable, taut thriller that never lets up on the intrigue as it races to tie everything together. What more could anyone ask for?

Sincere thank you to William Morrow, who provided me with a widget of the ARC. This is set to be released May 4, 2021.