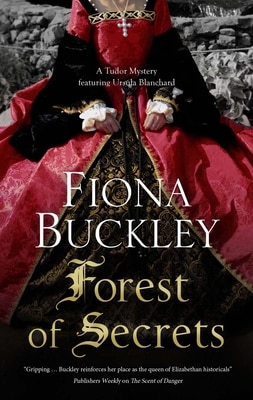 England, 1586. After weeks on the road investigating a possible treason, Mistress Ursula Stannard is journeying back home with her retinue. She solves mysteries and has the ear of the queen and her council.

Upon her arrival home, she has an unexpected guest: Etheldreda Hope, a simple country woman who comes from the New Forest. The vicar in her area wouldn’t listen to Etheldreda, so she thought to turn to Mistress Stannard regarding some strong goings-on in her village. “She thinks these Goings On, whatever they are, could have something to do with Mary Stuart.”

Ursula is tired of hearing the name of Mary Stuart, as the woman has been at the center of her life’s work as a spy. As a young woman, Ursula worked as a lady-in-waiting to Queen Elizabeth, where the pay wasn’t enough to support herself and her small daughter. She welcomed any chance to earn a little extra and undertook a secret mission. Thus, began her constant employment in secret missions. “Nearly all those missions had in some way involved Mary Stuart, the exiled queen of Scotland,” who plotted against Elizabeth.

The old tradition of Midsummer is taken for granted, but Midsummer in Chenston is special. There is more to it than the old tradition, and the meetings are happening more often. Etheldreda argues that that’s not right for Christian folks. The midnight rites call for the death of an evil queen, to save an honest one. But no names are attached. Which one is evil and which one is honest? Mary or Elizabeth?

Ursula’s investigations take her not only through the feasts at midsummer, but also Lammas and Halloween. The twisty plot is full of conspiracy and tensions, with plots brewing, conspirators being executed, some talking in hushed and horrified tones, others rising in savage joy.

Forest Secrets is a Tudor mystery that brings some fun characters, mixed with pagan traditions and beliefs, with a plot that takes twists and turns. It starts with a good hook, pulling the readers into the mystery from the first pages and continuously building intrigue.