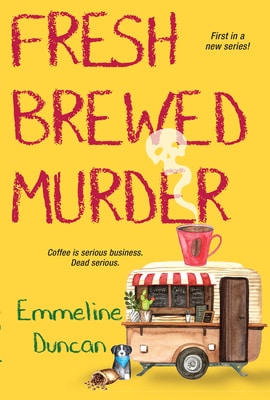 What is more iconic in Portland than food trucks? Sage Caplin and her partner and best friend, Harley, have opened a coffee truck in a local food truck lot.

Sage loves interacting with people and Harley is an amazing bean roaster. They work together to make sure their truck is a success, as Sage’s uncle has funded them. Their utmost goal is a brick-and-mortar store, which Uncle Jimmy can make happen, but only if they are successful. Almost immediately, drama surrounds the coffee truck. There are jealous food truck vendors, wondering how Sage got a coveted spot in this lot, when there is a long list of vendors waiting from losing their spot across the street, where a high rise is being built. The protestors, walking in opposition to the high rise, pose a threat to the new coffee truck, while Sage tries to befriend the homeless by offering them free coffee and food.

Just as Sage is getting the hang of running a coffee cart, one of her customers is found dead in front of her truck, his throat slit with the box cutter borrowed from another food truck owner. The detective assigned to the case automatically believes Sage was the murderer. After all, her mother is a con artist, the murder weapon was from her coffee truck and the victim was a customer of hers. Sage has not spoken to her mother in years, after she abandoned Sage when she was a young girl. Coincidentally, her mother had reached out the night before the murder. Is this a coincidence? But Sage has to find the actual killer now, before they arrest her for the murder.

Fresh Brewed Murder is the first in the series, Ground Rules, by Emmeline Duncan. Sage Caplin has had a very interesting life and also a very interesting family, starting with her Uncle Jimmy, who may or may not have questionable business practices. And then her brother Jackson, a lawyer, who is very protective of Sage, and her mother, a con artist and criminal who abandoned Sage when she was just a tween. Because of her background and the few days she spent homeless, she is very empathetic to the plight of the homeless teens that hang around the food truck lot. Sage is a complex character and I believe there is so much more to see of her.

Portland is the perfect backdrop to this adorable mystery with the dark skies and rain. Emmeline Duncan also provides the reader with a full education on coffee beans and brewing with recipes at the end. As in most mysteries, there are several suspects and an interesting link between Sage’s mother and the victim. The twist at the end surprised me as it was not someone I suspected at all and I love to be wrong when guessing the murderer. While Fresh Brewed Murder could be slow at times, I enjoyed the leisurely pace and interesting side stories.

The author is off to a wonderful start with her debut mystery in this series. I can’t wait to read on for the further adventures of Sage Caplin and her coffee cart.