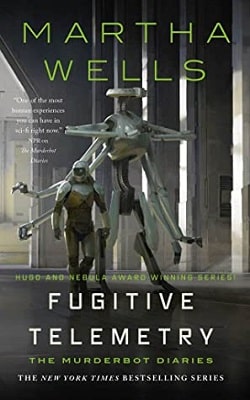 Fugitive Telemetry is book 6 in the Murderbot Diary series, and here Martha Wells proves that a satisfying story doesn’t have to be 500 pages long. Each of these sci-fi thriller novellas are fewer than 200 pages, and very filling.

Murderbot, the SecUnit’s secret name, is a combat-made killing machine that has decoded the governing device so it no longer needs to obey orders. No other SecUnit has ever done this and remained in one piece. Having the device gone, it says pretty much what it wants.

Within a few sentences, the Murderbot’s personality comes to the surface, like a cantankerous recluse who is forced to socialize and actually talk to people. The banter is hilarious!

Then comes murder. While killing is practically unheard of in their port, Murderbot knows a lot about death and is easily irritated with the slowness of human comprehension. Still, the mystery is on. Who is the “dead human?” Why was he killed? And where?

The characters are well developed and lovable. Murderbot has really grown in the books too. From the first book to this one, it has grown acceptance for itself and for those closest to it. Murderbot still doesn’t feel comfortable around people due to its past. It doesn’t like people staring, and it still doesn’t like to talk to people.

The remarkable world building makes the story really come to life. The various bots, drones, the interactions between them, the life and society rules are all amazing. The world isn’t just the background, it’s an intricate part of the story and plays a major role.

If you haven’t started the series yet, start from the beginning with book one, All Systems Red. After I read this current book, I had to go back and read them all again, just because they are that good.

This has been my favorite one so far. Action, mystery, high tech, lots of humor, social issues, and a Murderbot that has really grown on me. Murderbot may be a big, armored droid with big guns in its arms, but in many ways it’s more human than many people I know.

I requested this book from the Publisher and the review is voluntary and all my own opinions.

A dangerous madman wreaks havoc across the city

END_OF_DOCUMENT_TOKEN_TO_BE_REPLACED

The UN wants to broker peace between homicidal drug cartels