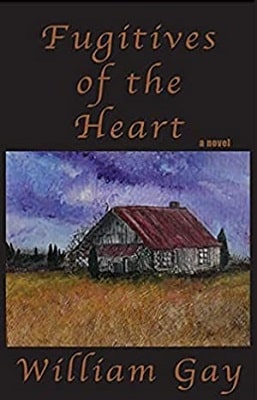 Fugitives of the Heart

Fugitives of the Heart is the last posthumous novel of William Gay. Gay, who passed away in 2012, remarkably did not have his writing published until well into his fifties, and is one to seek out.

The works of William Gay are best enjoyed when slowly mulled over and allowed to unfold at their own pace, like a closed morning flower opening its petals to the light of day. The more time allowed for his words and sentences to bloom, the more nuances and pleasures his writing will reveal.

Often, in his paragraphs and even in his longer sentences, the meaning of the entire passage may not be fully realized until coming to the last words. While to some this may seem troublesome, once a reader unlocks the mystery to the cadence of Gay’s writing—which does not take too long and may require just a small amount of patience—his descriptive powers and storytelling methods become clear, with readers soon being richly rewarded with the created imagery of his prose.

Fugitives of the Heart, an homage to Mark Twain’s Huckleberry Finn, is a coming-of-age tale of fifteen-year-old Marion Yates in rural, poverty-stricken Tennessee. In the novel, Gay depicts the growth and travels of Yates as he navigates through the complexities of the world filled with those that put more stock in the rearing and pedigree of people, rather than character and possibilities.

The novel opens with Yates as a small child who quickly learns of the need to rely mostly upon himself after witnessing the brutal aftermath of his father brought home after being caught poaching from a nearby farmer.

From then on, Yates roams the area learning the best he can from his own experiences and others in the area during the 1940s. Along the way, he develops a friendship with a black man named Crowe. Crowe, with a mysterious background of his own, seems unencumbered by the racial opinions of those around him and takes an interest in the young, but wiser than his age, Yates. Soon, as their relationship develops and with his own dangerous background slowly revealed, Crowe becomes a mentor to the Yates teen.

As the novel unfolds, Yates finds himself drawn to the woods and tends to spend much more time away from his home than residing with his some-time prostitute mother, all the while continuing his friendship with Crowe. His interest in the opposite gender also starts to emerge, only to seemingly create further problems for the teen. Yates continues to scratch out a life in search of meaning and purpose, especially as he finds too often people, even those you trust, are capable of betrayal and harm.

The writing in Fugitives of the Heart as with Gay’s other offerings, and like so many other Southern writers, is wonderfully descriptive and often so in diminutive locution. With his blending of words, Gay is so capable of describing everyday occurrences, such as voices along the riverbank, in such creative and unique ways, allowing the reader to think of such events in ways never before thought of.

Fugitives of the Heart is highly recommended to those fond of Southern writers and Southern noir.

This book was provided by NetGalley with the promise of a fair review.