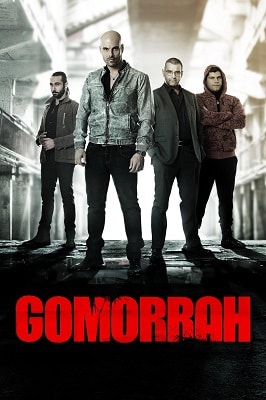 First, when it comes to the Italian series Gomorrah (Gomorra – La Serie) and the accompanying 2019 movie The Immortal (L’immortale), a caveat must be made and that is the series and movie are brutally graphic in the depiction of the behaviors of the participants in the international drug trade.  The carnage in the series and movie are what would be found in the American HBO series The Sopranos if it were ramped up on kilos of cocaine.

This is not to suggest the portrayed brutality is gratuitous or exploitative in its complete nature but how it is instead graphically depicted when amoral criminals are allowed to make all the rules and believe it is their nature and right to do anything it takes to maintain their “business.”

So far, the series Gomorrah is a four-season crime drama based in Italy, with a final fifth season to follow.  The movie The Immortal is a companion movie that falls between Season Three and Four and mainly focuses on the life of Ciro Di Marzio, (Marco D’Amore) and how he became known as The Immortal.

Like most excellent crime dramas, Gomorrah is filled with struggles, alliances, betrayals, brutality, and compelling plot lines.  The acting, filming, and story will not disappoint viewers.

Though the series and movie introduce a very wide assortment of complexly developed supporting characters, the main characters include members of the Savastano crime family in Scampia, Naples.  The Savastano clan is led by Pietro Savastano (Fortunato Cerlino), with his wife Immacolata (Maria Pia Calzone), as a valuable consigularie to her husband. The Savastano’s have an adult son, Gennaro (Salvatore Esposito), who in the opening season seems to be more interested in having a frat-boy-like good time, rather than fully appreciating he is the son to the Don and will someday be responsible for the clan.  The progression of the portrayal of Gennaro by Salvatore Esposito between the first and second seasons is remarkable.  It is similar to that of Vincent D’Onofrio’s portrayal of the transformation of the Gomer Pyle character in Full Metal Jacket, but instead of Gennaro becoming a suicidal psychopath, he turns more into an analytical sociopath.

More apt to be the future of the crime family is up and comer Ciro, The Immortal, who not only possesses a whirring mind always working in the background but one who is also trying to mentor his best friend Genarro without making it obvious Genarro is not made up of the same character as his father.

One wonderful aspect, but still a shocking aspect, of the series, is how when a viewer believes the show will not go ‘there,’ it does and that is one thing that makes this series and movie so compelling.  It is not fearful of allowing the unexpected to become possible.

Gomorrah is exquisitely filmed with beautiful darks, techniques, and colorful interiors. One constant location is of the deadly labyrinth of the La Vele housing estate in Scampia, Naples. The towering housing behemoth is both beautiful and horrifying in its intimidating existence, forcing one to ponder exactly how anyone could survive intact within its layered and maze of concrete walls.

As years go by, Gomorrah will clearly be noted as one of the best series on television and one often used as a measuring comparison for excellence in programming.

There is also a second 2008 film of the same name and based upon the writings of Roberto Saviano but that movie is unrelated to the series and companion movie.

Both the series Gomorrah and The Immortal are on HBO Max.