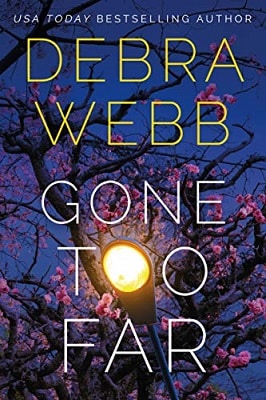 Birmingham, Alabama: A southern city founded on the iron and steel industry, and now a business hub with corporate offices for banking, telecommunications, and medical training, to name a few. Not what you would think of as the “genteel south” with its antebellum houses, slow speaking citizens, and relaxed lifestyle. In fact, it’s the perfect backdrop for hard-as-iron police detectives, Kerri Devlin and her partner Luke Falco.

There is another side to both Devlin and Falco, though. Devlin is a deeply caring, loving mother of a young teenager, Tori. And Falco is sensitive enough to have formed a strong bond with Tori, as well as offering support to Devlin whenever she needs it. These two sides of Devlin and Falco are on display from the beginning of Gone Too Far when they are called to investigate two execution style murders. Just as they are getting started on the investigation Devlin is called to Tori’s school about an incident involving Tori and the rapid switch from hard-nosed cop to gentle supporting mother and back again begins.

Almost before Devlin and Falco ca begin their investigation it is usurped by Mason Cross, a DEA agent with a “take no prisoners” attitude and military bearing. While in the middle of trying to plead this unfairness with their boss, the incident at school gets more complicated. Another team of detectives investigating the school incident is caught trying to force Tori, who was a witness, to tell them what happened without involving Devlin. That creates a tension between the two teams which carries through the entire book and increases as the two cases bump into each other.

As Devlin and Falco follow through on the parts of the investigation they are allowed to pursue, the reader becomes aware that Cross is not what he seems and there are unknown people pulling strings to thwart the investigation. They also cross paths with Sadie, a former police officer who went deep undercover in a Mexican drug cartel with ties to Birmingham who was tortured, and ultimately dumped back in town physically abused and suffering fractured memories. She also happens to be the estranged daughter of the DEA agent Cross. Father and daughter are almost opposites as he puts forth the appearance of being strictly “by the book” and she is a complete loose cannon.

The book is written with shifting points of view that rotate primarily between Devlin, Cross, Tori, and Sadie. This adds to the tension as the author, Webb increases the tension in one point of view, then quickly switches to another. The chapters are not long, and this format helps keep the reader engaged, perhaps far beyond what they intended. It is easily a book that could be so compelling a reader might choose to stay up half the night reading it. You can pick it up and put it down to do other things, but you might find that difficult. It is also a book that stays in your mind if you have to set it aside for a while, pulling you back and having you wondering what is going to happen next.

The plotting is tight, and the writing is exceptional, all of which combine to make an excellent book. The tension and intensity come more from what the reader anticipates than by overwhelming specifics of physical danger. There are just enough dangerous situations or the possibility of danger to ratchet up the tension a degree or two.

This is the second book in the series featuring Devlin and Falco although the stories are unrelated and this mystery is created and resolved entirely within this book. There are a few references to the previous book in terms of something Devlin did and how Falco helped her which ultimately forged their partnership. While it isn’t essential to understand what happened even to understand the partners, this book is so good and the hints are enough that readers may be encouraged to go back and get the first book in the series just to be fully aware of everything that has happened to the pair.

My thanks to Thomas and Mercer books and NetGalley for providing me with an advanced copy for this review. The opinions expressed here are entirely my own.