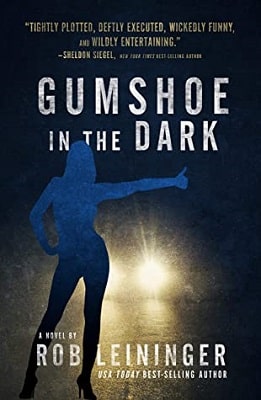 Gumshoe in the Dark

“I don’t mind a reasonable amount of trouble.”

Mortimer Angel worked sixteen years for the IRS as a field investigator. Fed up, he has decided to become a private investigator out of his nephew’s office in Reno, Nevada. He longs to be a modern day “Sam Spade” but what Mortimer Angel is, could only be called unique. He has a humorous voice that makes you laugh and cringe at the same moment.

Currently, he is trying to find a lost heir to a $680,000 fortune. He has 30 days to find the recipient, or the money goes to no-kill animal shelters. On his way to Las Vegas on a tip from a relative, Mort encounters Harper Leeman, a barely dressed hitchhiker who he stops to help, and she pulls a gun on him. Harper Leeman, in deference to Harper Lee, is alone on a rural road 30 miles from anywhere. As she tries to hijack his rental car, he cuts a valve stem and all the tires go flat. What could go wrong? Well, it turns out, the spare is flat as well. As Mort and Harper try to get along, they take the journey to Ely on three wheels in a very uncomfortable situation, with him sitting on his lap to balance the truck.

Gumshoe in the Dark is a laugh-out-loud hilarious mystery, which makes it difficult to swallow the gravity of some situations in the book. Mort seems to have a knack for finding dead bodies and body parts, and he doesn’t disappoint in this book. It is just so fun to read. Strong women, including his wife, his boss, and his new cohort; Harp also surrounded him. While Mort likes to portray himself as well mannered and inept, he is actually very smart and can be devious.

There is also a ton of crude humor, which can be funny but almost goes overboard. Mort and Harp seem to spend a lot of the book naked. Talking about being naked, or partially naked, which can be off-putting but is done humorously. There is quite a lot of discussion about body parts. Gumshoe in the Dark is the fifth book in the Mortimer Angel series and I am intrigued and delighted at finding this new character and series. There are some references to previous books in the series, but it is easy to follow along.