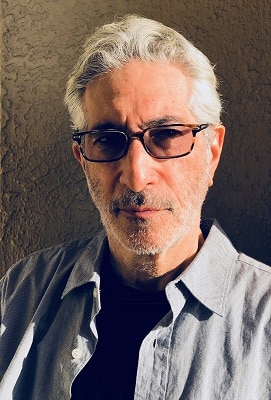 Q. With hits like Hell’s Princess and Deviant you’ve made a name for yourself as one of the foremost true crime writers who specialize in serial killers. What’s in the mind of this kind of killer?

Harold: It’s important to remember that the term “serial killer” is merely a relatively recent term for a phenomenon that has always existed and that used to be called “lust-murder.” Which is to say that it is an extreme form of sex crime. These perpetrators are typically psychopathic personalities—i.e., people lacking anything like a normal conscience or capacity for empathy—who put their rationality in the service of committing hideous sex murders. They can only achieve erotic satisfaction by inflicting torture and death on helpless victims. As for commonalities, one factor seems to stand out. With some exceptions, serial killers in general seem to have been tortured in some ways themselves as children, physically, sexual, psychologically. Inflicting pain and death on others becomes their only source of pleasure. Being made to feel utterly worthless as children, they also enjoy the sense of power they derive from torturing helpless victims and eluding (and often taunting) the police.

Q. What can readers learn and experience by diving into a story about serial killers?

Harold: I suppose they can learn something about the psychology or serial murderers but I’m always a bit leery of readers who claim that they are attracted to this type of literature because it’s somehow educational. From my own point of view, its appeal has more to do with our need, going back to our childhoods, for stories about monsters. As adults, we outgrow our childhood belief in werewolves and ogres and such but not our deep-seated hunger for stories about monsters. Reading about real-life monsters like Ed Gein or Albert Fish or Ted Bundy satisfies that need. In fact, when I wrote my earliest books about Gein and Fish, I thought (immodestly enough) that I was creating a new genre: not true crime but true horror.

Q. Your upcoming true crime, Maniac, takes us into the world of Andrew P. Kehoe. Who was he, and what did he do?

Harold: Kehoe was the perpetrator of an act that has been more-or-less totally forgotten but that I have come to believe was the most terrible American crime of the twentieth century: the so-called Bath School Disaster of May, 1927. A resident of the small farming town of Bath, Michigan, he was a respected member of the community who at one point served on the board of Bath’s modern new Consolidated School, which educated the town’s children from kindergarten through high school. Driven by increasing paranoia and a pathological resentment of the increased taxes he and his wife—a childless couple—would have to pay, he concocted a diabolical plan, rigging the school’s basement at night with hundreds of pounds of surplus World War I explosives and setting a timer to detonate the dynamite on the last day of class. Fortunately, much of it failed to go off, but one entire wing exploded. Then, when the first responders rushed to the scene, he loaded his pickup with shrapnel and more dynamite, drove to the school and blew up himself and several other people. (Just before this, he also murdered his wife, blew up his house and outbuilding, and killed his farm animals.) Thirty-eight children and seven adults were killed. The Bath School Disaster remains the worst school massacre in our history, as well as the deadliest act of domestic terrorism before Timothy McVeigh’s. It was also the earliest suicide car bombing in our history. My book also explores the reasons Kehoe’s atrocity was so quickly forgotten. One reason is that it was immediately displaced from the front pages by Charles Lindbergh’s epochal flight, which took place a few days later.

Q. When you aren’t researching serial killers, what do you enjoy? Any fiction?

Harold:  As many people are not aware, my day job for 42 years was professor of American literature at Queens College, City University of New York, with visiting stints at the University of Paris and the University of Colorado at Boulder. Which is to say, yes, I enjoy fiction. (I’ve actually written fiction: two horror novels, four mysteries, and, in collaboration with my daughter Lauren Oliver, three middle-grade books, one of which was nominated for an Edgar). As I get older—and I’ve noticed this as a phenomenon among us senior citizens—I also read a lot of non-fiction, though funnily enough, never true crime (probably because I’m so immersed in it in my research). When I’m not reading, I can usually be found saving the world from Commies, international terrorists, and alien supervillains on my PS4.

Harold: I am always fascinated by historical crimes that were major media sensations in their day but have, for whatever reason, faded into more-or-less total obscurity. I am currently finishing up a collection of four accounts such crimes: the 1866 slaughter of an eight-member farm family in Philadelphia in 1866 by an psychopathic employee named Anton Probst; the serial murders perpetrated in the 1860s and 70s by Lydia Sherman, “The Poison Fiend”; the crimes of Johann Hoch, our nation’s most prolific “Bluebeard” killer; and the utterly bizarre case of Carl Wanderer, a Chicago WWI vet who concocted a diabolical plan to murder his wife with the unwitting assistance of a homeless dupe known only as “The Ragged Stranger.” My book’s title is Butcher’s Work: And Other True Crime Tales Of American Murder And Madness. 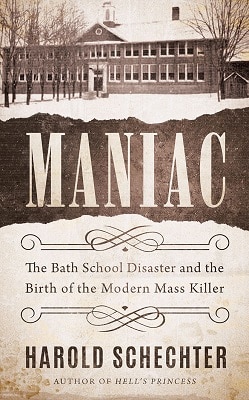 In 1927, while the majority of the township of Bath, Michigan, was celebrating a new primary school—one of the most modern in the Midwest—Andrew P. Kehoe had other plans. The local farmer and school board treasurer was educated, respected, and an accommodating neighbor and friend. But behind his ordinary demeanor was a narcissistic sadist seething with rage, resentment, and paranoia. On May 18 he detonated a set of rigged explosives with the sole purpose of destroying the school and everyone in it. Thirty-eight children and six adults were murdered that morning, culminating in the deadliest school massacre in US history.

Maniac is Harold Schechter’s gripping, definitive, exhaustively researched chronicle of a town forced to comprehend unprecedented carnage and the triggering of a “human time bomb” whose act of apocalyptic violence would foreshadow the terrors of the current age.

He returns home to find his wife, a knife still lodged in her neck

END_OF_DOCUMENT_TOKEN_TO_BE_REPLACED

The real-life inspirations behind history’s most infamous serial killers