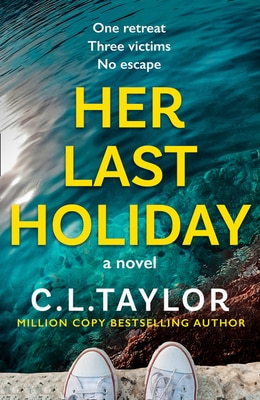 Meet Tom Wade. He is the reluctant Tony Robbins of the millennial generation. Having just been released from jail after several years, his eager wife is ready to host retreats again. However, on the last retreat, two people died under mysterious circumstances and one disappeared. What happened and where is the third woman?

This is my very first dance with the CJ Taylor and I am hooked. We have several mysterious deaths, a missing sister who may or may not be alive, one dysfunctional mother and a wife who is walking the line between high strung and dangerous. This book is told from several points of view, alternating between past and present.

Fran, described early on as a soft gray lump, is Jenna’s older sister. Jenna disappeared two years ago after attending one of SoulShrunk’s retreats, and her body was never found. They ruled it as a suicide, though Fran believes Jenna would never have committed suicide. Fran and her mother are obsessed with finding out what happened and sign Fran up under her name for Soulshrunk’s first retreat after they release Tom Wade from jail. Fran is reluctant to go, set in her ways and quirky, she is not one to go undercover. She agrees, after an immense amount of pressure and guilt, to attend the retreat under an alias.

Kate is Tom’s wife, who has been waiting quietly and eagerly for Tom to be released from jail. They have lost their fortune from previous retreats and Kate is now living in a small apartment, doing odd jobs to make money. She works hard to manage their ruined reputation, but Tom is still in love with Jenna, the girl who disappeared. Once Tom is released from jail, he is reluctant to start retreats again. His heart is not in it. But Kate insists, and he agrees to do one last retreat.

Almost as soon as Fran begins the retreat, the lies pile up. On the first day, she meets another woman attending, who is an undercover investigative reporter, also researching the mysterious deaths and disappearance of Jenna. As they uncover more deceptions and dishonest people, they realize their lives could very well be in danger as well.

Her Last Holiday reads like an Agatha Christie novel in the sense that there are so many twists and turns, and the reader is never quite sure who the murderer is until the very end. There are many characters in this book vying for the title of worst person and it can become confusing as some attended the last retreat, under different names. They are not all delightful characters, but overall they are fun characters and the book moved quickly. I am eager to read more from this author.