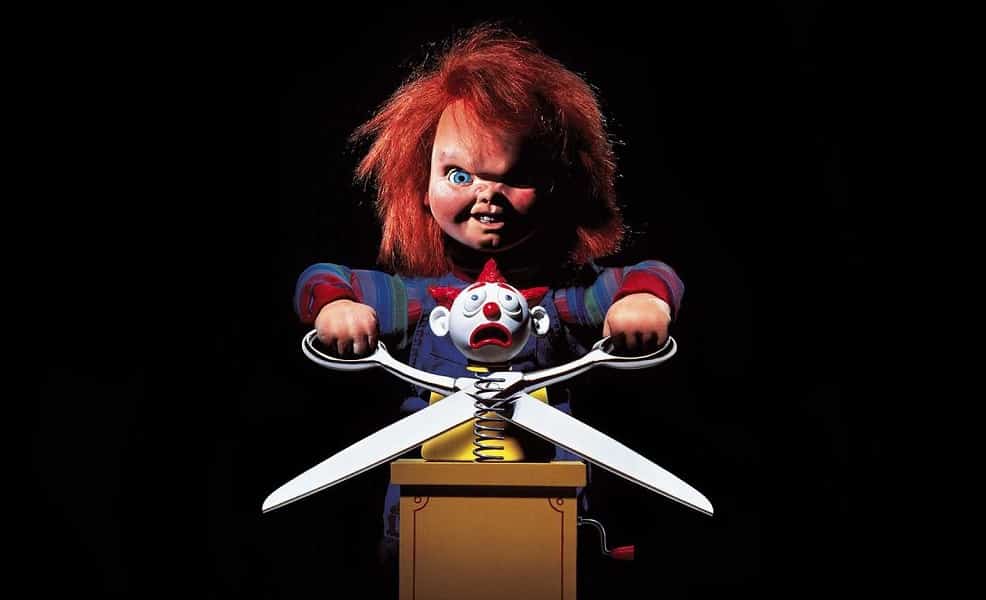 “Dolls with no little girls around to mind them were sort of creepy under any conditions.”

Humanoid figures ― dolls, clowns, dummies, mannequins ― they just creep us out. But, what makes them so scary? We can partially blame the “uncanny valley,” a concept based on the research of Japanese roboticist Masahiro Mori. Mori uncovered that humans grew more uncomfortable around robots when they became life-like. The unpredictable nature or ambiguity triggers innate feelings of fear and discomfort. Taking it a step further, there are people who have a specific phobia of dolls (pediophobia). Roughly 9 percent of the United States population have specific phobias ― an irrational fear of something that poses no actual threat. Even if they know that the fear is irrational, thinking about or seeing a doll can cause severe anxiety symptoms to someone with pediophobia.

Science tells us that we have a predisposition to think dolls are creepy. In fiction, there have been a number of stories that feature not-so-nice dolls. One of the most (in)famous was the Zuni Warrior Doll from the short story “Prey” by Richard Matheson. “Prey” and two other Matheson short stories became the made-for-television movie Trilogy of Terror (1975). The wooden doll inhabited by the spirit of a Zuni warrior attacks Karen Black’s character and ultimately possesses her.  Another literary nightmare toy was “The Monkey,” a short story by Stephen King. The toy monkey in the story is cursed, and every time it claps its mechanical cymbals together, someone dies.

With the popularity of demonic dolls in literature, television, and film, there has been a flood of terror tales using the “creepy doll” trope ― a figurative theme or device. Because “creepy doll” is such a wide topic, it’s interesting to note that you can break this down further into “subtropes.” Here are five “creepy doll subtropes,” each with its own distinct flair. 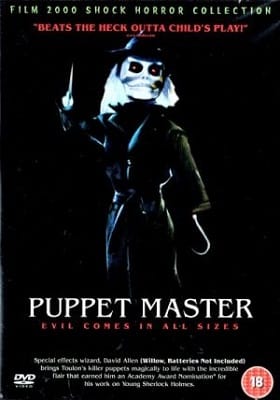 “…to a child caught in the middle of turmoil and conflict, a doll can become many things: friend, defender, guardian.” ― “The Living Doll,” The Twilight Zone

Anti-villain protector dolls only harm when provoked or to protect their masters. Examples include Talky Tina from The Twilight Zone and the puppets from the Puppet Master series.

Talky Tina seemed innocent enough (the real doll was a 1959-61 Vogue Brikette, modified similar to Mattel’s Chatty Cathy), but she did not feel welcome in the home of Erich Streator (Telly Savalas). Erich married Annabelle, a woman who already had a daughter, Christie. Erich and Annabelle could not have their own children. When Anabelle bought the talkative doll for Christie, Erich immediately felt threatened by it. Surviving the many attempts by Erich to “get rid of” her, Tina ultimately showed him who was in charge and also gave a fair warning to Annabelle (“You’d better be nice to me.”).

In the Puppet Master movie series, old puppeteer André Toulon created a series of puppets with distinct personalities and terrifying skills. They included Blade, Pinhead, Leech Woman, Jester, Tunneler, Torch, and Six–Shooter (and a few more introduced in future films). These puppets were used and abused by evil would-be puppet masters. These little demonic puppets were loyal to a fault; that is, until you crossed them! They worked together as a team for mayhem (but with purpose!). 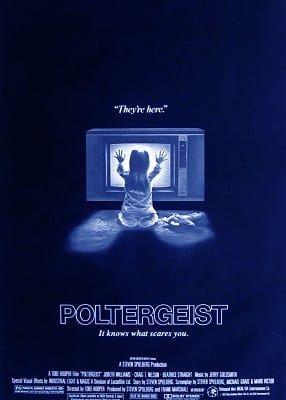 “[Clowns] are designed to make people afraid. If you go all the way back to the beginning of clownhood, they’ve always been bad. They’re pranksters; they play tricks.” ― Frank T. McAndrew, Professor of Psychology at Knox College

Clowns have a bad rap: The Joker from the Batman/DC universe, Pennywise from Stephen King’s IT, serial killer John Wayne Gacy dressing as a clown to lure his next victim, “Crazy” Joe Davola on Seinfeld… no wonder they creep us out! Clowns’ makeup hides their identities and feelings; this ambiguity generates fear. So, why not combine the creepy clown trope with the creepy doll trope?

Probably the scariest of all evil clown dolls is “The Clown Doll” in Steven Spielberg’s Poltergeist (1982). Young Robbie, Carole Anne’s brother, for some odd reason, had a very scary looking clown doll in their bedroom. It sat on a rocking chair near Robbie’s bed. Robbie was already a bit creeped out by the doll, so he would throw his jacket over the doll to cover it up while he was sleeping. One night, the doll disappeared from its chair and grabbed Robbie, dragging him under the bed. It was a very freightful scene, even more so in the fact that the doll really did start choking the actor who played Robbie (Oliver Robins), and Steven Spielberg had to pull the doll away from the little boy!

In the Saw horror franchise (and other cameos), we were graced with the presence of “Billy the Puppet,” a ventriloquist dummy doll (more on that subtrope later) that is painted with clown makeup and rides a tricycle. He is the “messenger” for crazed serial killer Jigsaw. So, stop and think about this: a creepy dummy with clown makeup delivering messages of pending doom that can chase you around in his tricycle? No thanks! 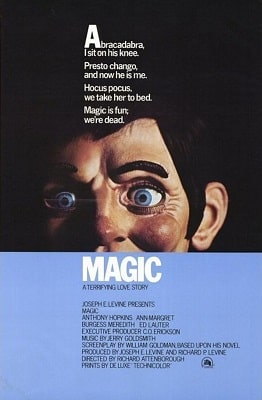 “She was there, but she was a corpse. So he began to think and speak for her, give her half his life, so to speak. At times he could be both personalities, carry on conversations. At other times, the Mother half took over completely. Now, he was never all Norman, but he was often only Mother…” ― Dr. Fred Richmond, Psycho (1960)

At the heart of the “uncanny valley” are the dummy dolls, in particular ones used by ventriloquists. These lifeless, humanoid objects were designed specifically for their “master” to “bring to life.” Big eyes, menacing grins … little hands that can probably hold sharp objects to kill you; yes, these dolls are not for the faint of heart.

In Magic (1978), starring Sir Anthony Hopkins, a disturbed puppeteer, Corky, and his dummy, “Fats,” wreak havoc. Fats serves as Corky’s alter-ego. Most say the film was a rip-off of Psycho, but it was one of the earliest cinematic takes on the killer dummy doll. It was also one of the inspirations for Don Mancini’s original screenplay for Child’s Play (1988).

RL Stine’s Goosebumps series introduced us to “Slappy” and “Mr. Wood” in Night of the Living Dummy. These mischievous dummies come to life and serve to insult and torment their human counterparts. Although it’s not directly stated, Slappy may have been modeled after Willie, the ventriloquist’s dummy in The Twilight Zone (“The Dummy”). 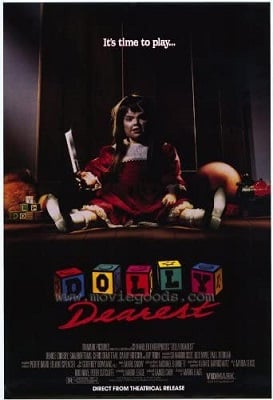 “Ade due damballa. Give me the power, I beg of you!” ― Charles Lee Ray, Child’s Play

Given the human-like form of dolls, it’s only natural that a demonic spirit would want to transfer its energy into an innocent doll. This brings us to the conduit/possession subtrope. This may be the most popular representation of a demonic toy, made most famous by Chucky of Child’s Play fame. The purpose of the possession is to serve as a conduit such that the evil spirit can ultimately find its way into a real human being.

There have been many Chucky clones over the years ― one of which was the 1991 slasher Dolly Dearest. Denise Crosby, of Pet Sematary and Star Trek: The Next Generation fame, starred as the mother of the young girl Jessica. Jessica is befriended by “Dolly,” a doll possessed by the malevolent spirit of Sanzia (Satan on Earth). Dolly and Jessica formed a bond to a point where Jessica is controlled by “Dolly Dearest.” 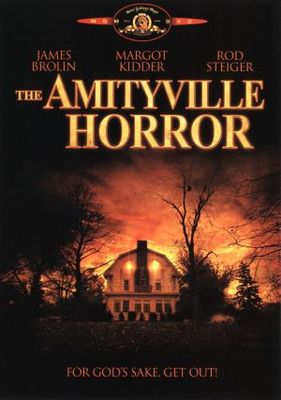 “Diabolical forces are formidable. These forces are eternal, and they exist today. The fairy tale is true. The devil exists. God exists. And for us, as people, our very destiny hinges upon which one we elect to follow.” ― Paranormal Investigator Ed Warren

“Based on a true story.” When that phrase is tacked onto a work of horror fiction, it becomes even more terrifying. For example, Jay Anson’s The Amityville Horror: A True Story, which later became a motion picture starring James Brolin and Margot Kidder, was the true account of the paranormal events that transpired in December 1975, when George and Kathy Lutz and their three children moved into their Amityville, New York house. After 28 days, the Lutz family left the house, claiming to have been terrorized by malevolent entities. Whether you believe George and Kathy or not, what they experienced was very frightening to them.

The paranormal researchers of “The Amityville Horror” were none other than Ed and Lorraine Warren. As depicted in The Conjuring franchise, the Warrens were in possession of a very evil doll ― Annabelle. Annabelle served as a conduit of an evil spirit. Living inside the seemingly innocent Raggedy Ann doll was a dark spirit that haunted two nurses who lived together in Hartford, Connecticut. The doll moved from room to room on its own … crossed its legs on its own ― unexplained phenomena. The Warrens were able to retain possession of the doll, but what evil resided in that doll was unknown.  The film franchise that resulted fictionalized the accounts, but knowing in the back of your mind that this may really have happened can send extra shivers down the spine.

Aside from Annabelle, there have been a number of other haunted dolls that received some fictional Hollywood treatment. Robert the Doll is probably the most (in)famous. The doll’s original owner, Robert Eugene Otto, was an eccentric artist from a prominent Key West family. A hand-made doll from Germany, Robert was given to Otto as a birthday gift and was dressed in a sailor suit, emulating what Otto wore as a child. Legend states that the doll has supernatural abilities allowing it to move, make giggling sounds, and change its facial expressions. Several movies were made based on the legend, including Robert (2015) and The Curse of Robert the Doll (2016).

We weren’t born afraid of dolls. Over time, exposure to horror movies, reading scary stories, and other pop culture influences allowed for the association between evil and dolls. As Rod Serling pointed out in “The Living Doll” closing commentary: “Of course, we all know dolls can’t really talk, and they certainly can’t commit murder.” Separate fact from fiction, and you’ll realize that that little doll sitting on your shelf isn’t going to jump on top of you and start stealing your breath ― only evil trolls do that! That’s for another article… 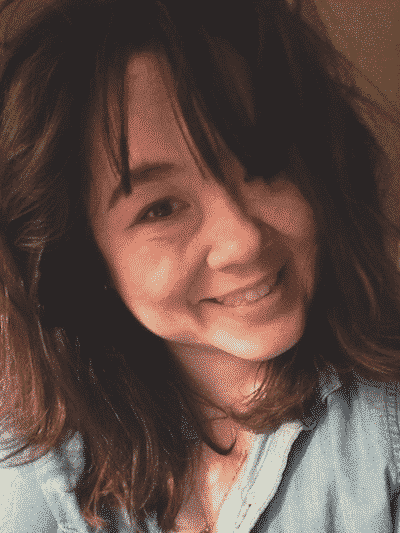