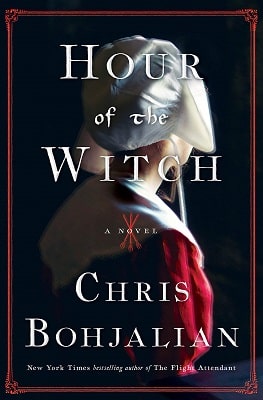 1662, Boston: Divorce is almost unheard of. But under the strain of abuse, does the impossible become plausible? Even if under the threat of death by hanging?

Mary Deerfield’s husband, Thomas, has a simple routine. He drinks, he hits her, and then goes away and drinks more. When he is busy at the mill that usually puts him in good spirits. Thus, drinking “only as much cider and beer as he needed to quench his thirst.” But one day, he stabs a fork into her hand flatly placed on the table to discipline her. And he’s not even deep in his cups. According to the law, a husband has a right to discipline his wife. He doesn’t seem to see his brutality, but Mary does, and she’s reached the breaking point. She has heard of the word before: divorce.

There are some who envy her because of her parents’ wealth and privilege “in ways that few others were in Boston.” Her father, a renowned merchant, knows the governor and the magistrates, and he would know what to do to begin this process of divorce.

Per magistrate, her parents are reputable people, but her husband is also considered a man of good standing and reputation, owner of the largest gristmill in the North End. But there is more to the story, which may have further complications. Mary finds two forks in the ground in the walkway to her house, then a pestle. Her servant girl thinks it’s some sort of spell. Certain things could get misconstrued and be perceived as Satan’s work. It’s a time when even the most nonsensical accusations could cause grievous injury.

Mary is a very likeable character. One readers sympathize with and want to see happy and out of harm’s way. She sees other women getting pregnant and that’s what she constantly prays for. Her situation is chilling, and yet she is willing to take another risky path to get off the current one.

Thomas turns out to be not only a brute, but also a liar. At first his abrupt behavior keeps you on edge, but then his lies put you over the edge. His temerity leaves you speechless. The timeperiod is intriguing, from customs through novelty of a three-tined fork to the use of old language in dialogue (thy, thou, thee). Most importantly, Hour of the Witch is a gripping page-turner, written with beautiful prose and enthrallingly developed characters.