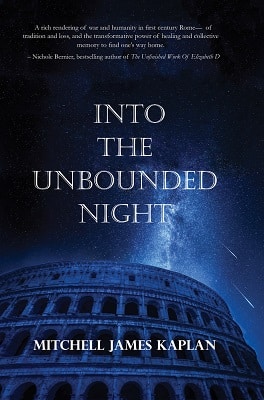 Into the Unbounded Night takes us to a time of ancient stones paving the way to the great temples. A time when different ideologies rub shoulders leading to the birth of Judeo-Christian monotheism. It is also a time when accumulation of wealth and power leads to rebellion and destruction. With Kaplan’s gifted storytelling, the reader is transported into the ancient times of turmoil and history in the making.

The year is 40 C.E., on the island of Britannia, in the village of Albion. Fourteen-year-old Aislin is being raised by her aunt, after an illness left her motherless. Her aunt Muirgheal is a local warrior, “a great warrior and a leader of her people.” A visitor appears at their village warning of invading warriors, warriors “well-armed and extraordinarily disciplined. (…) They come from a place called Roma, and their general is a giant called Vespasian.” When her village is depopulated, after a brutal Roman invasion, Aislin travels to Rome to avenge her people.

Yohanan, son of Zakkai, is a priest-in-training in Jerusalem. When he witnesses injustice from those in power, he accepts punishment for speaking up. But he will not accept the injustice. He leaves Jerusalem behind in search of his home. In Judea, he finds a congregation of Aravites which “mirrors the festivities of the holy Temple in Jerusalem.” He is a Pharisee who tries to preserve traditions against the Zealots’ uncompromising resistance of Romans.

In Rome, after an uprising, Aislin finds herself at a prison-cell which she shares with Paulus – known today as the apostle St. Paul. She admires “his sense of purpose – his absurd conviction that what he has to say (…) will change the world.” She is skeptical of his story, but she finds his compassion and radiance moving. Some aspects of his story confuse her, but his “preoccupation with the well-being of the weak, the crippled, and those who feel shunned” fascinates her. After Rome burns and citizens are misplaced, Paulus entrusts Aislin with a task of delivering something important to Judea.

The story is character driven and with supporting characters, they all are intricately developed and connected by historical events that shape the first century lands conquered by Romans. Bringing such themes as competing visions of a man, Pharisees vs Zealots, leading to the destruction of the Second Temple in Jerusalem. Accumulation of wealth and power by some, pushes others to even deeper poverty, and others even to rebellion. How the Romans were able to control the vast lands they conquered. By offering true cities made of stone and brick, not of wood and mud, thus no need to display skulls at a gate in order to discourage an enemy.

As we get to know the characters better and better, they pull us deeper and deeper into the story. And with the Romans ravaging the villages of Britannia you can feel the tensions and you can feel that it’s just a matter of time where and when they strike again.

I can’t say enough how much I appreciate the quality of this story and the writing. And the research that went into crafting such fine book with compelling plot, rich historical background and well-developed characters including some iconic figures St. Paul and Yohanan ben Zakkai.

I’d like to finish with the words which I found profound, “…we must forever hope for a day when respect for life and peace will be universal.”

when the Circus of Wonders arrives in the village, a girl is kidnapped

END_OF_DOCUMENT_TOKEN_TO_BE_REPLACED

The School of Mirrors

She’ll grow up searching for answers about her birth

END_OF_DOCUMENT_TOKEN_TO_BE_REPLACED

He returns to Nebraska after serving a year for involuntary manslaughter