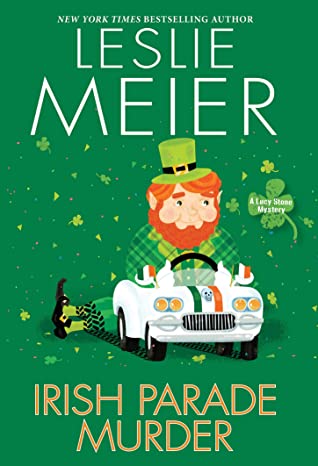 As the coastal town of Tinker’s Cove prepares for their annual St. Patrick’s Day festivities, Lucy Stone is dealing with loss, family drama, changes at the paper, and, of course, murder and mayhem in Irish Parade Murder.

To say Lucy Stone has a lot of irons in the fire is an understatement. The recent death of her father-in-law has the whole family grieving the loss. Shortly after returning home from the funeral, a woman claiming to be her husband’s long lost half-sister brings about thoughts that she is financially motivated in her efforts to get close to the family. A shake up at the Pennysaver creates anxiety as Lucy is questioning exactly where she fits in the evolving organization. When the questionable happenings surrounding the town St. Patrick’s Day parade begins to surface and a new, overzealous reporter is jailed and accused of murdering a troubled corrections officer, Lucy sets out to gather the facts and set the record straight.

Irish Parade Murder is the 27th book in the Lucy Stone series by Leslie Meier. As a first time reader of the author and the series, I had no issue getting into the storyline or connecting to the characters. This book works as a standalone.

I often expect the books I read to reflect something about the authors who wrote them. I did not expect this book to feature so many “ripped from the headlines” topics, such as police corruption, BLM, activism, and inclusion as major themes throughout.

Meier makes an incredibly edgy decision to write about these complicated social subjects in a book about small-town life. I truly appreciate an author that can respectfully take very serious, sensitive real world subjects and integrate them into the fictional world they have created. These true to life elements will have some readers cheering that even fictional worlds are seeing progress, while others might be disappointed that their escape to another world has been compromised.

Meier has a very approachable writing style that makes her work quite pleasing to read. Despite confronting some very challenging issues in this book, the story is often very funny and the characters are likeable, flawed, and overall interesting creations. Meier manages to seamlessly weave together multiple family, community, and social themes in her work.

All that considered, please don’t let the addition of current events discourage reading this installment. This is a terrific cozy mystery that will have the reader guessing whodunnit right until the very exciting end.