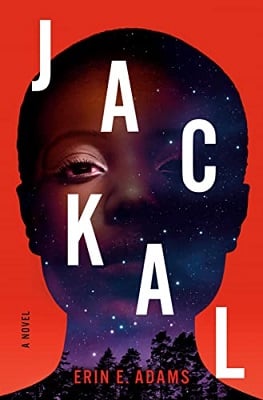 “To live like a lion for a day is far better than to live for a hundred years like a jackal.”

–Tipu Sultan, as quoted in Encyclopedia of Asian History.

Jackal is not your typical “scary” story. It is unconventional, terrifying and will make you angry about current issues of racism, inequality, and certain class differences. It is a mash-up of politics, horror, thriller and friendship that will absolutely make you look under your bed after reading it. But it is also about real life monsters hiding in plain sight of what is a seemingly normal town in Pennsylvania.

Liz Rocher is a black woman. She grew up in Johnstown, Pa. as one of the few black girls in an all white town. An outcast, she had one loyal friend, Melissa, and at 30 she is returning to Johnstown, to attend her friend’s wedding to a black man. Melissa, who had been banned from her family for choosing her future husband, and having his child is now getting married with her family in attendance. Liż plans to stay until after the wedding and go back to her life in NYC. Having just broken up with her abusive fiance, Liz is a mess with a significant weight gain and all her hair cut off. But the reason she has not been back since graduation is the death of her old friend, the “other black girl”, Keisha Woodson who was killed by a monster in the woods when they were young teens. Liz witnessed the attack and has never been the same. Now Melissa’s wedding is being held on the edge of those same woods, woods that Liz has never stepped into again.

When Liz’s beloved goddaughter, Caroline, the daughter of Melissa and Garrett, disappears into the woods, all they find is a piece of her dress covered in blood. She disappears while Liz is supposed to be watching her and things quickly become tense. As the search for Caroline begins, Liz has memories of what happened with Keisha Woodson so many years ago. But when she delves deeper into the search, she realizes young black women have been going missing on the same day in the same woods for years. What is the connection? Now she has to find Caroline before it is too late.

I loved the beginning and middle of this book. I could not read it fast enough but when reaching the last chapters, I couldn’t figure out what was happening. It went from issues of racism, deep-seated intolerance, and tragedy to something somewhat supernatural and it was confusing. I agree with the sentiment that is expressed in the reviews that this will be a book you love or hate. I loved it but I wish the ending had been more based in reality than fantasy. If you can suspend disbelief, then you will be the one that loves this. For me, I just felt it was an odd ending to an incredible book but didn’t stop me from loving Jackal. I can’t believe that this is Erin Adam’s debut novel, and she has done a fantastic job. She created that uneasy feeling which is hard to put into words. There are so many red herrings and creative passages. This book will definitely make you look under your bed before you go to sleep!

Jackal is available at:
Amazon