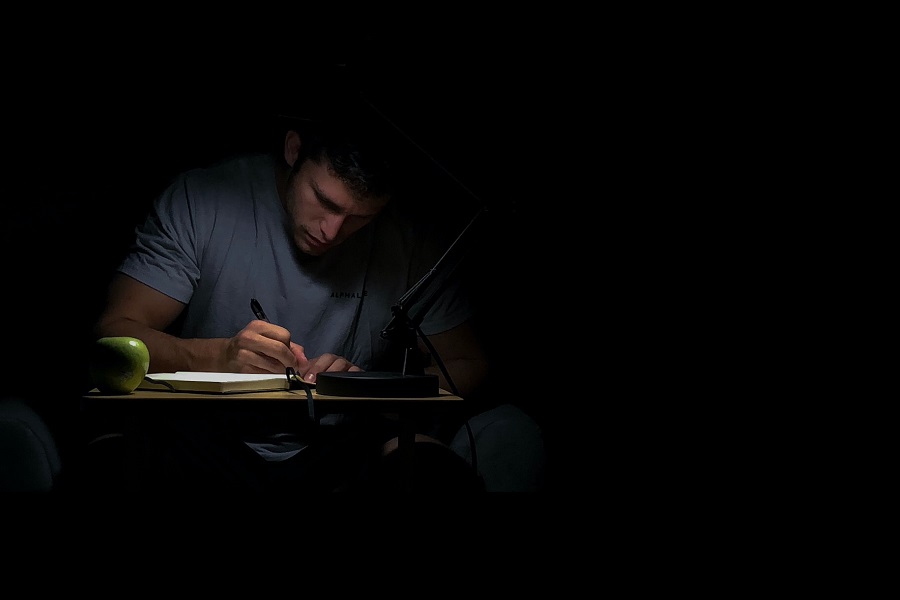 What Makes a Killer? Handwriting reveals the truth.

The name Clark Rockefeller may tug a memory string. Movies and documentaries were made about the man who pretended to be one of the famous family, conning his way into marriage to a high-powered businesswoman and getting her to support him. Then later, when exposed for the fraud he was, kidnapping their six-year-old daughter off the street during a custodial visit.

It took the FBI six days to unravel the elaborate plan ‘Clark’ had devised for stashing the child. During that time, it came to light that he was a person of interest in a California cold case.

Back in the 1980s, Karl Christian Gerhartsreiter (his real name), calling himself Christopher Chichester befriended a woman named Didi Sohus, inveigling his way into her guesthouse in the tony neighborhood of San Marino. Didi’s newlywed son Jonathon and his wife Linda were living in his childhood bedroom in the home, an arrangement that soon wore thin. In their twenties, Linda was an artist who painted fantasy creatures under the name of ‘Cody.’ John was a computer tech looking for a job.

Linda told friends and family that she and John had a job interview in New York—the company wanted both of them. The couple boarded their six cats and left town. And that was the last anyone ever saw of John and Linda Sohus.

Several weeks later, her beloved cats abandoned, Linda’s friends and family received postcards, not from New York, but postmarked Paris. Note, she had never owned a passport and there was no indication she’d gotten one. Plus, Linda never went anywhere without her art portfolio, but it, along with everything else she and John owned, had been left behind. With no evidence of a crime, police hands were tied, and Didi told friends that her ‘secret source’ had told her they were on a special mission and were fine.

Fast-forward eight years. Didi had died. Some say it was a broken heart, others, less charitably, blamed alcohol—maybe it’s the same thing. The San Marino home had been sold and the next owners decided to install a pool in the backyard. Guess what they found.

DNA was not in common use in the early 90s. It wasn’t until 2010 that the human remains diggers had uncovered in the excavated backyard were positively identified as Jonathon Sohus, killed by a blow to the head. Ground penetrating radar failed to find evidence of Linda’s body and no trace of her has ever been found. Luminol highlighted lots of blood in the guesthouse, though. And the remains were wrapped in a bag from a school Gerhartsreiter had attended.

Eventually, he was extradited to California and the media clamored to know about the handwriting on the postcards—was it Linda’s? Several handwriting experts opined that it was not. That’s where I entered the story.

As a forensic document examiner, I’m sometimes called for an opinion when handwriting is in the news. Frank Girardot, a reporter for the Pasadena Star contacted me and asked what I thought. He supplied me with handwriting known to be Linda’s for my examination. At first glance, they appeared quite different. People have different ways of writing, so I asked for, and got, additional exemplars. I made a direct comparison of letter designs and combinations, punctuation, and specific words and found strong similarities between them.

Dateline NBC called and I spent six hours with reporter Mike Taibi and a film crew at a fancy hotel in Pasadena, explaining my opinion. When the episode aired, those six hours translated to about ninety seconds on screen. That’s show biz.

Much later, I learned that Linda’s friends and an L.A. County Sheriff’s document examiner agreed with me that the handwriting on the postcards was hers. On April 3, 2013, I was called to testify in front of a TV camera in the trial of Christian Karl Gerhartsreiter for the murder of Jonathon Sohus. I spent about ten minutes on the witness stand—a record. The prosecutor had two questions:

“It’s your opinion that Linda Sohus wrote the postcards?”

“Yes.”
“Do you know how the writing came to be on the postcards?”

“No.” He might have had a gun pointed at her. The defense’s theory of the case despite all evidence pointing strongly at their client, was that Linda had killed her husband and disappeared. Gerhartsreiter, who never once looked up from his notes while I was testifying, was found guilty and sentenced to twenty-seven years.

My handwriting analysis practice has included several clients awaiting trial for murder, but few are as high profile as the one I’ve just recounted. Still, I have analyzed many criminals, including serial killers. The CNN documentary, Murder by Numbers, displayed the handwritings of some serial killers they had profiled. I contacted the producer, Richard Griffiths, who sent me copies, including the one I’m going to talk about here: Christine Falling.

A Florida babysitter who was convicted of killing several children in her care, Christine (nee Slaughter—an apt appellation) was the child of a sixteen-year-old mother and a sixty-five-year-old father. It’s no surprise that her life was less than perfect. She was said to be ‘mentally challenged,’ unattractive and obese. Hit in the head with a two-by-four by her mother, she suffered from epilepsy.

In and out of foster care and orphanages, Christine began by killing animals. At fourteen, she had a six-week marriage to a man in his 20s. Due to her mental deficiencies, apparently, it was deemed that the only job she could handle was babysitting. Over the next two years, five children died at her hands.

In the first case, the child was taken to the doctor and diagnosed with meningitis due to a traumatic brain injury. When Falling claimed the child had fallen from her crib, the doctor didn’t believe her. Unfortunately, the note he wrote to the police, asking for an investigation, was lost and Falling moved away.

She began babysitting a four-year-old boy who died in her care; cause of death listed as myocarditis. Again, doctors weren’t buying it. And yet, Falling’s killing spree continued. At the boy’s funeral she was asked to babysit a two-year-old. Amazingly, he died only hours later of a ‘viral infection.’ Three days after that, his two-year-old cousin died of the same illness. Guess who was babysitting.

Before anyone could put the coincidental deaths together, Falling moved again, and guess what—on her first day at work in a home for seniors, one of the residents, a seventy-seven-year-old man died in the kitchen.

Next, the eight-month-old daughter of Falling’s half-sister died while Christine was looking after her, diagnosed as sudden infant death syndrome (later, Falling admitted to “smotherating” the baby to get her to stop crying).

Finally, the autopsy of an eight-month-old she was babysitting showed suffocation injuries. At last, when the police interviewed Falling, she confessed to three murders—she had been obeying voices in her head. She was convicted and sentenced to life in prison. Her first application for parole was denied. The next is due in 2024.

What does Christine Falling’s handwriting tell us about her? Emotional immaturity is seen in the large, rounded style, which is typical of young girls. Falling was about thirty at the time of writing. There are several interesting features, including the upper loops shaped like a candle flame, such as the ‘l’ in ‘letter.’ This is often found in someone who has suffered a head injury that affects the way they think. Next, some letters look like an ‘x’ but are not. Notice the ‘M’ in ‘Me’ and the ‘r’ in ‘Really.’ In my experience, these x-formations are made by someone with what I call ‘death consciousness.’ Usually, someone close to them has died and they feel guilty for some reason. Or, they may be facing their own death due to old age, illness, or having thoughts of suicide.

The very low t-crossings in many places are an indicator of depression, seen throughout the sample, of which this is a small excerpt. The personal pronoun ‘I,’ lying on its back, appears in some women who feel disappointed in their relationship with their father. The curved ending strokes on the ‘y’ in ‘pretty’ that turn back to the left is a way of drawing attention to herself.

This is just a thumbnail sketch of what handwriting can reveal. There is much, much more, but I have to include a caveat: there is no “this means that” in handwriting analysis. The traits I’ve mentioned must be considered within the context of this handwriting. Meanings can change depending on what other elements surround them. Using the gestalt method of analysis, I examine the whole picture of space—how the writing is arranged on the page; the letter designs; the complex aspects of rhythm, speed, pressure, and many other factors.

Like Claudia Rose, the main character in my Forensic Handwriting suspense series, I work in two areas of handwriting: authentication and personality assessment. What I’ve learned from more than fifty years’ experience is that handwriting cannot tell everything about the writer; people are too complex to be able to do that. Handwriting can’t tell chronological age or gender identification. It certainly can’t predict who is going to be a killer. But it can provide a lot of important information to those who are willing to listen.

I wish my daughter, Jennifer, had been one of them when she met and fell in love with Tom, a man who worked as a federal agent for the Immigration services. His handwriting held several red flags for danger, but Jen had always been headstrong, and at twenty-seven she wasn’t going to let anything stop her from doing what she wanted. The three of us discussed his handwriting and the potential for problems, but a few weeks later he moved into her apartment. It didn’t take long for things to go to hell.

They had known each other for less than a year when Tom shot Jennifer eight times as she was running away. As police arrived, he turned the gun on himself. His handwriting could not predict this heinous act, but it did show his need to be in control, his explosive temper, his impulsiveness. Like Christine Falling’s handwriting, there were also signs of a head injury.

Handwriting is a projective behavior like body language and tone of voice. Before you say it’s no longer taught, let me close with this encouraging information: as of 2020, twenty-five states required cursive writing be taught in public schools. Five states had similar legislation pending. Some leave it up to the school district, and only ten states had no requirement at all.

So, next time you scribble a note to yourself or someone else, take a moment to think about what your pen is revealing about you.

Sheila Lowe writes stories of psychological suspense that put ordinary people into extraordinary circumstances. Like her fictional character Claudia Rose in the award-winning Forensic Handwriting series, Sheila is a real-life forensic handwriting expert who testifies in court cases. She also writes the Beyond the Veil paranormal suspense series and nonfiction books about handwriting and personality.

Sheila holds a Master of Science degree in psychology and has taught forensic handwriting examination in the Crime Scene Investigation Certificate program at the University of California Riverside campus. She has served as a guest lecturer in the UC Santa Barbara Discovery Program, and Ventura Community College in the Criminal Psychology department. She has served as president of the American Handwriting Analysis Foundation for nearly a decade and is on the board of directors of the Scientific Association of Forensic Examiners.