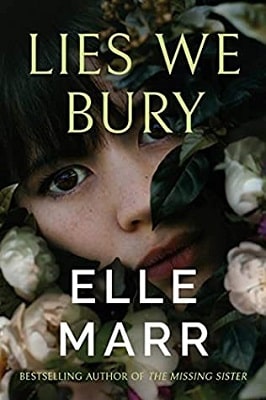 Marissa Mo was born in captivity, raised by three different women over the course of her early life, until she was finally able to escape with her three sisters. Now, Marissa (who has changed her name to Claire) is twenty-seven and trying to overcome the demons of her past, living in Portland and working as a crime reporter for a local newspaper.

On the twentieth anniversary of her escape (which also coincides with the release of her captor, a.k.a her father, from jail), Claire begins to be taunted by a perceived stranger; notes left on her car and on her shower mirror at home taunting her with memories of her past and pieces of her childhood showing up in places she never expected. Claire begins to wonder if she will ever be able to escape her past, and when she quickly becomes a suspect in a string of murders, she knows she has to deal with her family skeletons if she wants to clear her name.

Lies We Bury is the second novel by author Elle Marr. Her previous thriller, The Missing Sister, topped the Amazon charts when it was released, and I have no doubt that her sophomore novel will do the same. Fraught with tension and insurmountable suspense, “Lies” is gripping and addictive.

The novel is told from Claire’s perspective, in alternating timelines (present day and twenty years ago when she was held captive), with Claire narrating both as an adult, and as a child. Claire’s childhood description of the underground lair and her psychopathic, sadistic father/captor, Chet, is deeply disturbing, and the innocent way in which it is told resembles Emma Donoghue’s smash hit, “Room”. The tragic and heartbreaking events experienced by Claire and her sisters are painted with a child’s brush- and it instantly pulls as the heartstrings.

As an adult, Claire is likable and endearing and she immediately garners sympathy from the reader. Her adult relationship with her sisters is honest, too, broken and dysfunctional and yet full of love and devotion.

When Claire is targeted, many promising suspects instantly jump to mind, and it is through the creativity of Marr’s writing that so many tantalizing possibilities exist. Not only is the ending believable and satisfying, but, even better, you won’t see it coming.

Lies We Bury is dark and compelling, and it will pull you into its web right from page one. Marr’s writing is addictive and page-turning, and I was so invested in the outcome, that I did not want to put this one down.