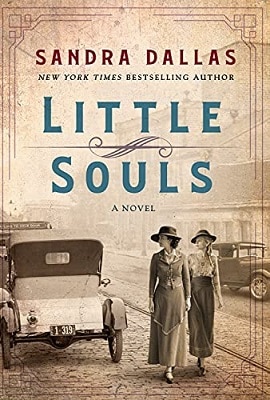 This novel is set during World War I, when the Spanish Flu pandemic devastated populations around the globe. The deadly illness infected about 500 million people worldwide and may have caused up to 50 million deaths. People were so frightened of the disease they would leave victims in the streets, to be picked up by death wagons.

The story opens in 1918, when America is scurrying to produce the soldiers, food supplies, munitions and money needed to win the war. After the death of their parents, two twentysomething sisters, Helen Hite – a nurse, and Lucretia (Lutie) Hite – a fashion illustrator, move from Iowa to Denver, Colorado. The sisters buy a house and rent out the basement to the Streeter family, Ron, Maud, and their 10-year-old daughter Dorothy.
Helen is engaged to a doctor called Gil Rushton and Lutie dates a theology student named Peter Howell. Even though he’s a divinity student, Peter feels compelled to enlist in the army, and he proposes to Lutie before he leaves for France.
Basement tenant Ron Streeter is an unemployed rotter who constantly fights with his wife Maud and sexually abuses his daughter Dorothy. Eventually Ron moves out of the house and deserts his family, and Maud dies shortly afterwards, from the Spanish Flu. This leaves Dorothy in the care of Helen and Lutie, who love the child and think of her as a younger sister.
One day Lutie comes home from work to find Ron dead on the kitchen floor, Helen standing over him with an ice pick, and Dorothy crouching nearby, in shock. Helen says she stabbed Ron when he broke into the house and tried to rape Dorothy. With the help of Helen’s fiancé Gil, the sisters leave Ron in a vacant lot, with a note saying he was a victim of the Spanish Flu.
The sisters hope Ron’s body, supposedly riddled with flu virus, won’t be closely examined. However two  detectives show up at Helen and Lutie’s door, saying Ron was murdered. The detectives are clearly suspicious of Helen and Lutie, but the women insist Ron moved out months ago, and they haven’t seen him since.
As the police investigation proceeds, Helen and Lutie try to adopt Dorothy, but are stymied by the girl’s aunt and uncle, Beulah and Gus Vincent, an unscrupulous couple who have nefarious plans for the little girl. In fact, there are suspicions that Ron Streeter ‘shared’ Dorothy with Gus. Luckily, the parents of Lutie’s fiancé Peter – a wealthy influential couple – make it their business to help Helen and Lutie.
As the story unfolds, secrets are revealed, tragedies occur, and the ongoing suffering of trauma victims is discussed. The bonds of family and friendship are examined, and it’s clear that human connections help the characters cope with trying events.
The story provides a dire picture of the Spanish Flu pandemic, which was eerily similar to the recent Covid-19 pandemic. The Spanish Flu resulted in the closure of schools, businesses, theaters, places of worship, and other public gathering places. Mass transportation was limited and people were advised to wear masks, practice social distancing, institute appropriate disinfection procedures, and quarantine victims. As with the Covid-19 outbreak, some people/municipalities followed the rules better than others, with a resulting difference in mortality rates.
I listened to the audiobook version of the story, which was excellently narrated by Carly Robins.
Little Souls available at:
Amazon